Works from the Wetlands Series 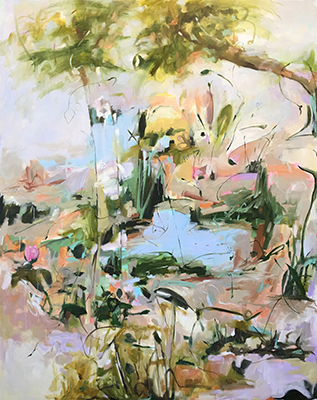 Portland artist Renée Zangara will be exhibiting her “Wetlands Series” of works on canvas and paper, and mixed media on board in Gallerty 440 in Strand Agriculture Hall on the OSU campus April 3 through June 2, 2017.

Organized by the College of Agricultural Sciences through its Art About Agriculture program, the exhibit includes works on canvas and paper, and mixed media on board that explore the diverse characteristics of Willamette River wetlands. Native plants and animals, as well as water and soil, all play a part in Zangara's richly layered compositions.

Two receptions will be held in the gallery to coincide with the third Thursday Corvallis Art Walks on April 20 and May 18; both receptions run from 3:30 to 5 p.m. Zangara will speak about her “Wetlands Series” at the reception on April 20, beginning at 4 pm. Gallery 440 is located on the fourth floor of the recently remodeled and restored Strand Hall.

Zangara draws much of her inspiration from the banks of the Willamette River near her home and studio. “When I amble along the river or stand among a grove of trees, I am witness to an orchestrated cacophony of shapes, tangles, ripples, waves, buzzing vigor and enormous abundance,” she writes. “For me, it feels like a calling--to record, edit and express how I see and absorb this exceptional sliver of Northwest geography.”

From its source in the Cascades and Coast Range to its junction with the Columbia River, the Willamette forms one of the most fertile agricultural valleys in the world. Situated in the river's upper basin in Corvallis, OSU serves as headquarters for innumerable Willamette River research projects and studies spanning the arts, humanities and sciences.

A Portland resident for the past 25 years, Zangara is active in the city's art community.  She is a member of Nine Gallery and currently serves on the public art advisory committee for Portland’s Regional Arts and Culture Council. Zangara exhibits her work nationally and her art is in private and public collections, including the Portland Art Museum; Oregon Health and Sciences University; PricewaterhouseCoopers; and the OSU College of Agricultural Sciences, which includes two of her works in its Art About Agriculture Permanent Collection.