Note: This trial was initiated in 2006. A detailed review of this trial (including soil test values) from initiation through the end of 2008 is available on the OSU website found at the following link: http://groups.hort.oregonstate.edu/node/462

A 90/10 greens grade sand/organic mix 12” deep was placed over a previously prepared native soil sub-surface and was planted in April of 2004 with aerifier plugs taken from greens at Corvallis Country Club. The grass was approximately 80% annual bluegrass and 20% Penn A-4 creeping bentgrass. The area was fertilized as needed during 2004 to develop functional putting turf. Maintenance fertilizer applications are made every two weeks as liquid sprays. Lime and gypsum (Huma Cal & Huma Phos) are applied twice a year after coring in granular form.

Turf was mowed at 0.100″ five days a week during the spring and summer season and 0.130″ during the winter season. Irrigation is applied as needed to produce healthy turf that is on the dry side. Coring and heavy topdressing is performed twice annually in spring and fall. Light sand topdressings are applied every other week during the spring, summer, and fall and approximately monthly during the winter. In the spring of 2008, all plots were verti-grooved with a Graden verticut machine to a depth of 1 inch in April to reduce the development of layering.

* The sulfate comes from gypsum in Huma Cal and Huma Phos.

Note: The 2008 data was analyzed for main effects and interactions between sulfur and calcium. An interaction occurs, for example, when for a given calcium treatment, different disease severity is observed based on the rate of sulfur applied. As an example, in 2008 we have seen, on plots treated with lime, a decrease in Microdochium patch disease when sulfur was applied.

Severity In the High N Trial, there was an interaction between calcium treatments and sulfur treatments on all three rating dates – February, October, and November. The plots treated with lime had an increase in Microdochium patch disease, but when sulfur was applied at the medium or high rate, there was less disease. However, the plots treated with lime and sulfur still had more disease than plots that did not receive any calcium applications.

On plots that did not receive any calcium, the high rate of sulfur decreased Microdochium patch disease, but only on the February rating date.

After one year’s worth of anthracnose data, it is too early to recommend calcium treatments as a way to reduce anthracnose disease; especially given that the data shows a large increase in Microdochium patch disease when lime is applied.

There were two months – May and June – where the plots were not significantly affected by either Microdochium patch or anthracnose disease. During these two months there were no statistical differences in plot quality.

Observations (not supported by statistics) and Comments

Although the nitrogen levels were not replicated in this trial, given our results in the last 3 years, it seems safe to say that lower nitrogen applications decrease Microdochium patch disease, especially when lime is applied. However, as the Microdochium patch data on February 14, 2008 shows, lower rates of nitrogen do not completely prevent the infection, but may reduce the number of fungicide applications necessary.

Additionally, if lime is being applied for cultural reasons, sulfur applications can substantially decrease Microdochium patch disease, but not below the disease level that would have occurred had lime not been applied.

Therefore, the overall strategy to decrease Microdochium patch disease would be to:

Surprisingly, monthly sulfur applications did not increase anthracnose disease. Given that we have heard many reports from superintendents indicating that high rates of sulfur increase anthracnose, it may be that our sulfur rates are not high enough to cause this effect.

The trial for 2009 has been reconfigured. First, because the late summer anthracnose injury was interfering with Microdochium patch ratings in the fall, we decided to use one nitrogen rate (4.5 lbs N/1,000 sq ft./yr) and split the green by disease. Additionally, because Huma Cal and Huma Phos were no longer available from our supplier, we replaced these products with gypsum and Cal Phos, which do not have humates in them (we have not seen any effects from humates after 3 years). The Cal Phos is straight calcium phosphate and does not have gypsum in it.

Soluble fertilizer is applied every two weeks except as noted during the summer. 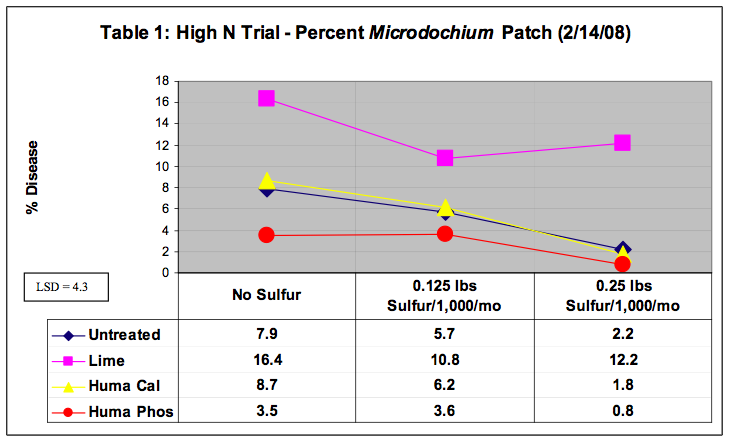 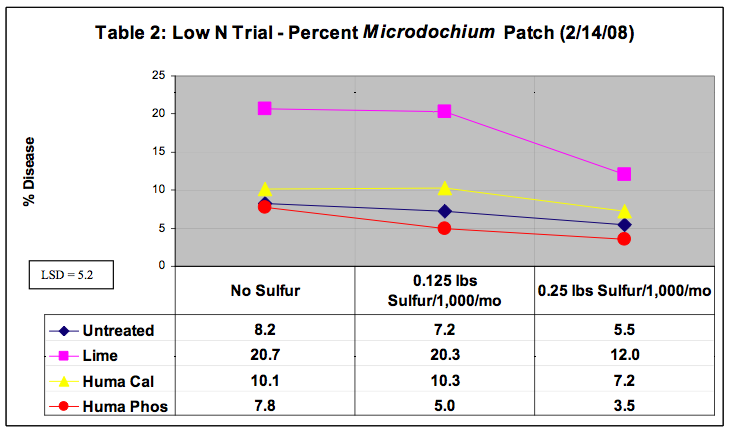 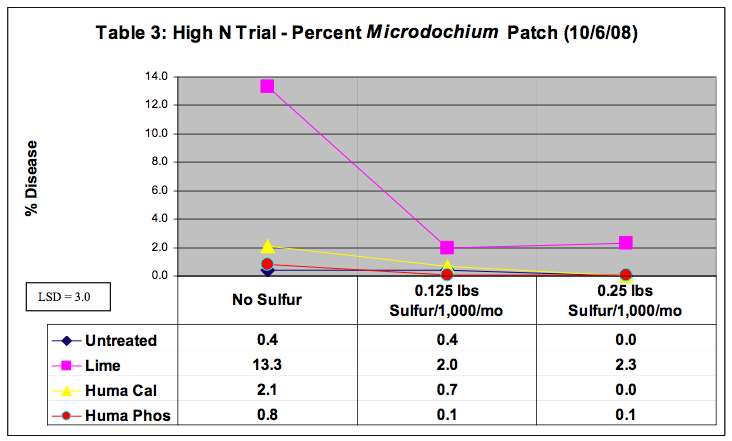 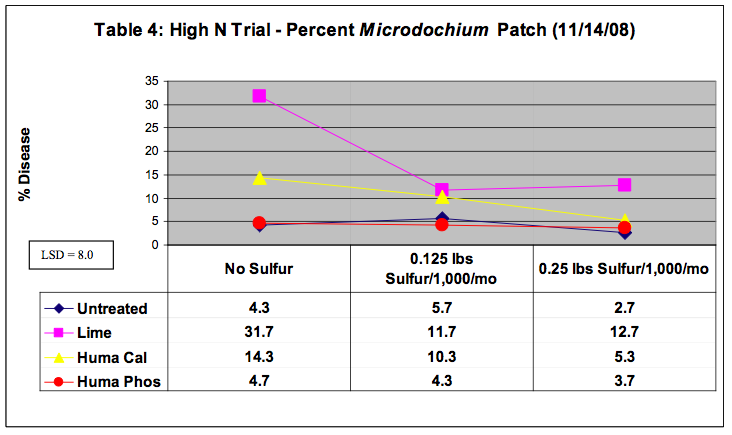 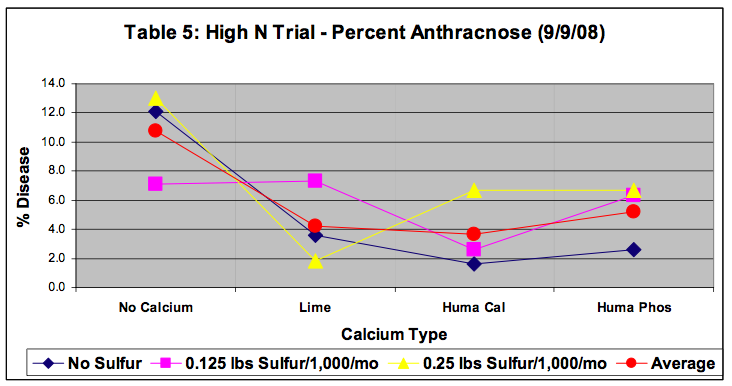 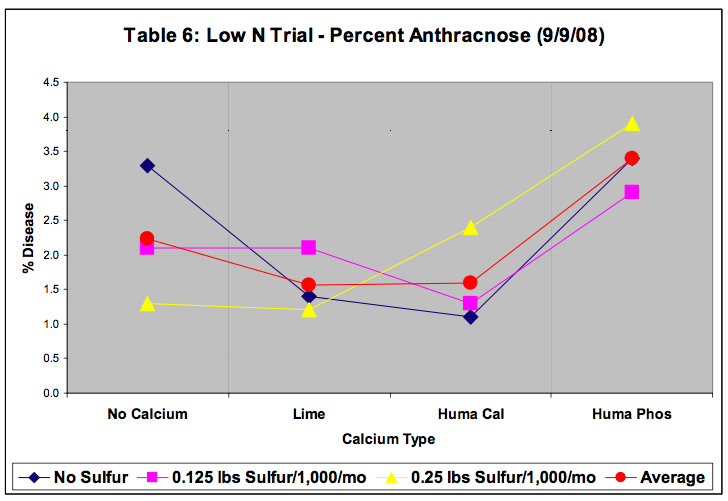 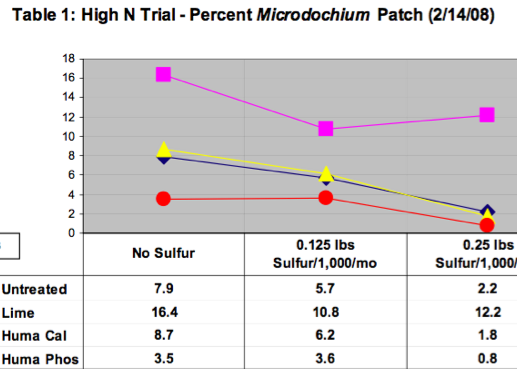