The primary objective of this trial was to determine whether repeated applications (2, 3, or 4) of Proxy (ethephon) or Proxy + Primo (trinexpac-ethyl) caused phytotoxicity to ‘Providence’ creeping bentgrass maintained at putting green height. A secondary objective was to evaluate turf quality of putting green turf treated with Proxy, Proxy + Primo, or Trimmit (paclobutrazol) growth regulators.

The trial was initiated on March 21, 2008 at the Lewis-Brown Horticulture Farm in Corvallis, Oregon. The site was a ‘Providence’ creeping bentgrass putting green which was built in the mid 1990’s on a 12 inch sand/compost mix. Annual bluegrass has been removed by cutting out plants with a pocket knife every spring. Soil tests are done every spring and the pH has hovered around 6.0.

The green was mowed at 0.145 inches at the start of the trial and lowered slowly to 0.115 inches by the first part of June. After the first week of June, the mowing height was then raised to 0.125 inches for the rest of the trial. The putting green was cored on June 24th with 5/8 inch tines.

The trial was designed to evaluate 2, 3, and 4 applications. However, because of the severe injury from the Proxy treatments, the fourth application was not made.

The trial was set up as a randomized complete block design with 3 replications. Plot size was 25 square feet (5' X 5'). Visual turf quality and injury ratings were made on April 18th, May 2nd, May 17th, May 30th, and June 13th. The data for each rating date were subjected to analysis of variance (ANOVA) and the differences between means were determined by LSD at the 5 % level.

* The 4th application was not made because of severe injury to plots treated with proxy.
** Irrigation was applied at 0.125 inches of water.

The applications were made on the following dates:

Proxy caused significant phytotoxicity to the bentgrass putting green after two applications. The injury was first noticeable 7 days after the second application and became obvious 2 weeks after second application (See photos below and Table 2). From this trial, it is not discernable whether the injury was caused directly by the Proxy applications or as a result of scalping. There were no obvious mower scalping lines but the turf quality did improve slightly when the mowing height was raised.

When Primo was added to the Proxy, the injury was not as severe but the turf quality still suffered.

There was no turf injury from any of the Trimmit applications. However, Trimmit did darken the turf and also caused the leaf blades to become coarser over time (this effect became more prominent after 3 applications). The coarser leaf blades did decrease the turf quality slightly.

* Note: The mowing height was raised from 0.115” to 0.125” and the green was fertilized after the first week of June. These changes improved turf quality.
Attachment: 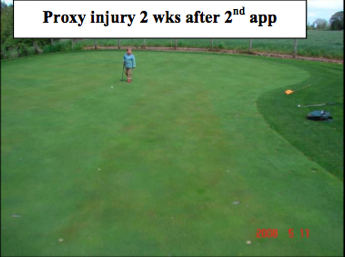