The purpose of this trial was to evaluate the effectiveness of various fungicides in controlling Microdochium patch (Microdochium nivale) on an annual bluegrass putting green.

The trial was initiated on February 22nd on an annual bluegrass (Poa annua) putting green located at Oregon State University’s Lewis-Brown Horticulture Farm in Corvallis, Oregon. The green was constructed using the “California method” where 12 inches of straight USGA sand was placed on top of a soil sub grade.

Irrigation pipe and flat tile drainage was installed on the sub grade before the sand was installed. Poa annua sod (purchased from Boss Sod, Canada) was laid in early May of 2009. The mowing height was reduced to 0.150 inches by the middle of July and remained there throughout the summer, fall, and winter. Soluble nitrogen applications were made weekly during the summer at a rate of 0.10 lbs of Nitrogen per 1,000 sq. ft. During fall and winter, 0.5 lbs of nitrogen per 1,000 sq. ft. was applied monthly.

Daily temperature ranges and relative humidity for the dates of applications are listed in the table below:

On February 22nd, it began raining a couple of hours after the treatments were applied; a total of 0.14 inches of rain fell. No rainfall occurred on March 17th or April 9th.

Visual disease severity and plot quality ratings were taken on February 26th, March 17th, March 31st, April 9th, and April 20th. Disease severity ratings were based on percent plot cover from 0 – 100 percent. Data from each rating date were subjected to analysis of variance using a randomized complete block design with 3 replications. Differences between means were determined by Fisher’s LSD at the 5% level.

All plots had a small amount of disease at the start of the trial but the average percent disease cover for all treatments was 0.26 percent or less calculated based on the number of disease centers times the area of each disease center.

The first 3 weeks of the trial had low disease pressure with the untreated check plots averaging 0.9 percent disease cover on March 17th. However, by March 31st, disease pressure had increased and the untreated check plots averaged nearly 8 percent disease cover. From March 31st until April 20th, the percent disease cover tripled to over 25 percent for the untreated check plots (see graph). This pattern tracks with rainfall. After February 22nd, rainfall decreased steadily from .05 inches on February 23rd to 0.1 inches by February 28th. For the first 23 days of March, it only rained .09 inches never exceeding .02 inches in a single day. The next 7 days of March (24th through the 30th), it rained 3.9 inches. And for the first 20 days of April, it rained 2.87 inches.
Generally, with the exception of FFII, the granular products were not effective in controlling Microdochium patch in this trial. FFII provided excellent disease control but there was slight phytotoxicity and fertilizer spotting on March 31 – two weeks after the second application. Plot quality improved by April 9th but the phytotoxicity was worse on April 20th, 11 days after the third application. 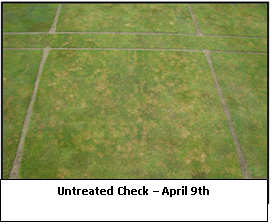 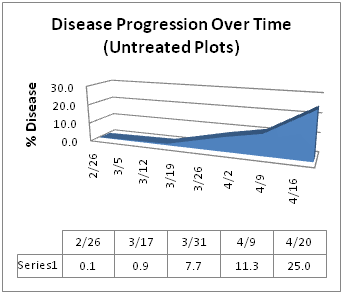 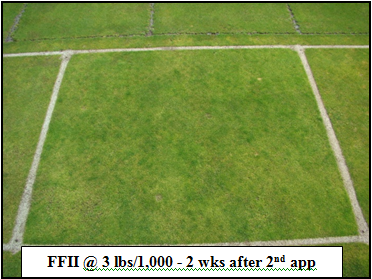 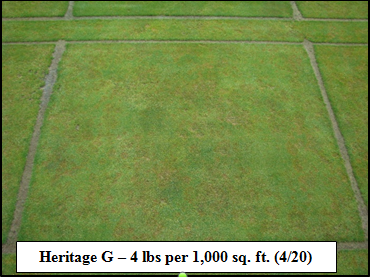 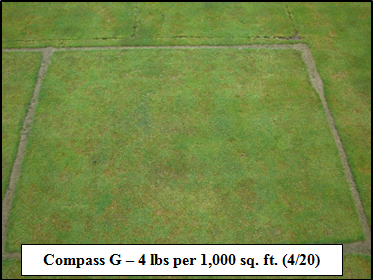 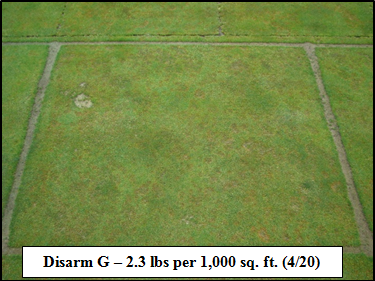 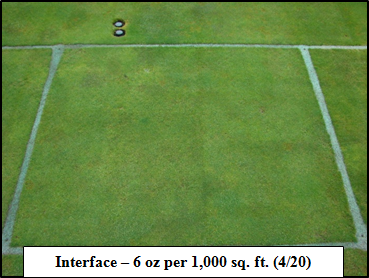