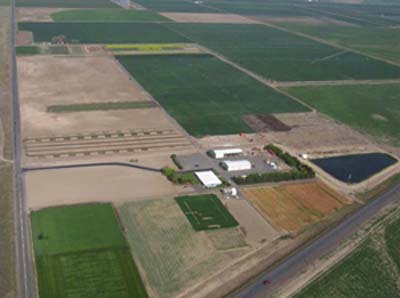 Researchers at the Central Oregon Agricultural Research and Extension Center serve all of Central Oregon (Crook, Deschutes, and Jefferson Counties) and are dedicated to providing relevant and timely solutions for growers. COAREC researchers operate out of the growing facility in Madras, OR which was established in 1991.

The city of Madras is located in Jefferson County, at the center of 60,000 acres of irrigated crop land. High value, specialty crops provide the core of this progressive agricultural community.

The major grass seed crop is Kentucky bluegrass used for lawns. Jefferson county is also the primary production area for rough bluegrass, used in warm season climates to over-seed turf areas in the winter. This provides a green lawn when the warm season grasses have gone dormant and the lawns would otherwise be brown.

Peppermint in central Oregon has historically been grown for oil used in chewing gum, toothpaste and candy. More recently production has shifted to tea leaves used for peppermint tea, an alternative to traditional tea drinks. Much of this product goes to Europe, where the drinking of hot tea is more popular.

As State, Federal and Grant funding for Agricultural Research Stations and Extension continue to decrease, we become more reliant upon our local communities to support programs they find valuable.  While the central Oregon agricultural community has been overwhelmingly supportive of the work performed at COAREC, our need continues.

Your contributions allow COAREC to continue to provide important research and education opportunities for central Oregon that are vital to the agricultural community and local economy. In addition, as a direct result of the ongoing financial support from central Oregon, the College has made several recent investments in COAREC. These include:

As we look to the future, it is the local involvement and your ongoing investment in COAREC that will move us to forefront of cutting-edge research.  To make a contribution to the COAREC Support Fund which is managed by the Oregon State University Foundation, you may use the icon to make an online gift, or you can mail it to our office at: 850 NW Dogwood Lane; Madras, OR 97741.

The http://jeffcoseed.com/ site was created in partnership with the Jefferson County Seed Growers Association and Oregon State University to educate the public about local agriculture. It details the crops grown in Jefferson County, Oregon, features stories about local farm families and provides a better understanding of programs such as smoke management and Farm Fair. If you have any questions or comments, please contact us.

*For hours outside of this, please call and make arrangements*

Want to visit our office? (Map)

Directions coming north on US-97 (Bend): Merge onto US-97 North. Continue through Madras onto US-26 W/NW 5th Street. Continue to follow US-26 West approximately three miles. Turn left onto NW Dogwood Lane, Central Oregon Agriculture Research and Extension Center will be on the right.

Directions coming east on US-26 (Portland): Continue on US-26, driving towards Madras. Approximately 3 miles before you reach Madras, turn right onto NW Dogwood Lane, Central Oregon Agriculture Research and Extension Center will be on the right.