There are many species of Phytophthora that infect nursery plants. This discussion focuses on Rhododendron and Phytophthora without regard to specific species of either host or pathogen.

The phases of the disease cycle are:

Oospores and chlamydospores form in infected leaves, roots, or stems. When these plant parts die, the spores stay with the organic debris but may wash down into the soil or potting medium. They may survive a long time in soil, even after the plant tissue has decomposed.

The spores lie dormant until environmental conditions and the presence of a host plant stimulate them to germinate. Roots grow near an oospore or chlamydospore. Soil may become saturated with water from rain or irrigation. Chlamydospores and oospores can then germinate to form hyphae or sporangia. Under these wet conditions, zoospores form inside the sporangia. 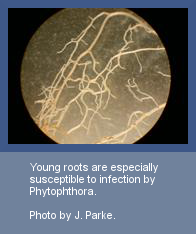 Zoospores are expelled from the sporangia and begin to swim around. Normally, they swim toward a growing host root, attracted to chemicals from the root. The zoospores congregate either just behind the root tip, in wounds, or in areas where root branches are produced.

The zoospore becomes a cyst just before the organism infects the root. Now, the thread-like hyphae begin to grow inside the root.

Infection also can result from hyphae coming directly from oospores or chlamydospores.

Although soil saturation is necessary for infection, once Phytophthora is inside plant tissues, it 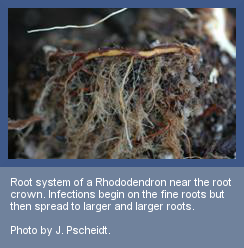 can continue to colonize the root even if soil is not saturated.

After the plant cells are killed, they discolor. Although many roots are infected, at this stage there are plenty of other functioning roots to support the plant. Plants may remain healthy looking despite substantial infection below the ground. However, there may be subtle above-ground symptoms such as reduced vigor, reduced growth, or ”off” color.

The organism continues to infect more and more of the root system until it reaches the root crown area. The organism kills the cambium and eventually will girdle the plant. 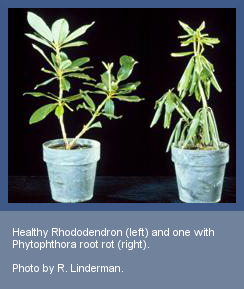 Once the root crown is girdled, water and nutrients cannot reach the leaves. Now the upper portions of the plant begin to wilt and die back. Rhododendron leaves roll, droop, turn yellow or brown and die. Though infection may have begun several months ago, this may be the first time symptoms of the disease are visible above ground.

It is not unusual to see infected plants right next to plants that appear healthy. Symptoms may develop quickly when the plant’s water demand increases during the first hot, dry conditions of summer.

Soil again becomes saturated from rain or irrigation. After several hours of wetness, sporangia develop on the surface of rotting roots. Zoospores can swim to nearby roots of the same plant or can be moved by running water to a healthy plant. 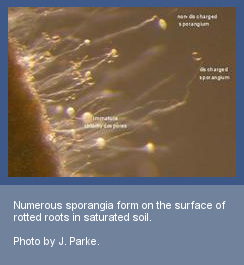 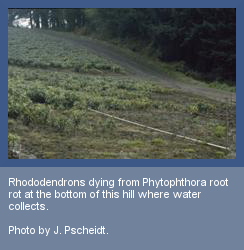 Once near healthy roots, zoospores again swim to the roots, attach themselves, and begin infection. The root system of this next plant rots, and symptoms occur above ground as before. New sporangia are produced, and new zoospores are released.

Some Phytophthora species can infect leaves as well as roots. Once zoospores are released from sporangia and are free in the water the zoospores can be splashed onto leaves of a nearby plant. Once on a susceptible, wet host leaf, zoospores encyst. They then penetrate into leaves in the same basic way as they do into roots. 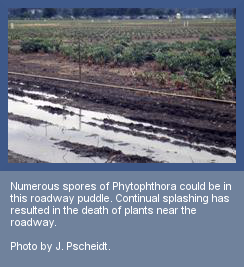 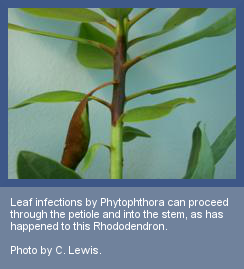 Leaf spots may develop near leaf tips and margins and then enlarge. Tissue death may continue down the leaf along the midrib. Entire leaves may become brown and die, or the infection may remain as spots on leaves. New sporangia can be produced in these spots. These sporangia can be splashed or wind blown to new leaves and start new infections.

Leaf infections can develop through the petiole and into the stem tissue, causing stem lesions. Shoot tips also can be infected. Symptoms develop from the meristematic tip down through the shoot. Other leaves that are attached to the shoot will wilt and droop once the stem has become diseased. Infected leaves may fall off of the plant to the ground. 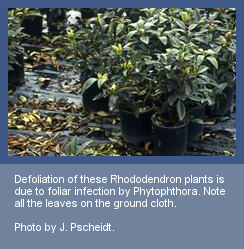 Oospores form in infected roots or leaves. While in or on the ground, this tissue decomposes or withers away, leaving the oospores behind. Dead plants and leaves may be removed, but infected portions may remain. If new, susceptible plants are planted in the same area, then all that is needed is soil saturation to start the disease cycle once again. 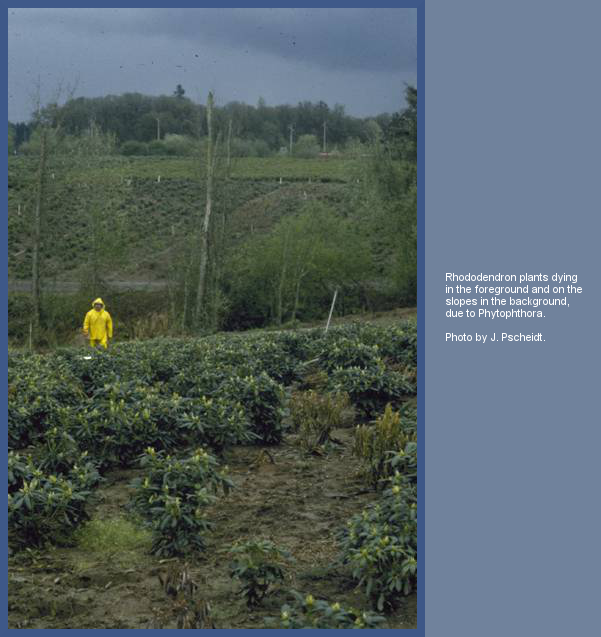