The water mold Phytophthora ramorum is an invasive pathogen that recently became established in the United States. Phytophthora ramorum affects a wide range of woody, perennial plants including forest, landscape, and nursery plants. It is the cause of several plant diseases, including Ramorum leaf blight, Ramorum dieback, and—the most widely known—sudden oak death.

Phytophthora ramorum has already killed more than 1 million forest trees in California, and it has spread to one forest location in the southwest corner of Oregon. Phytophthora ramorum also has been found in some nurseries in Europe and British Columbia. To date, the disease has not become established in forests outside the West Coast. 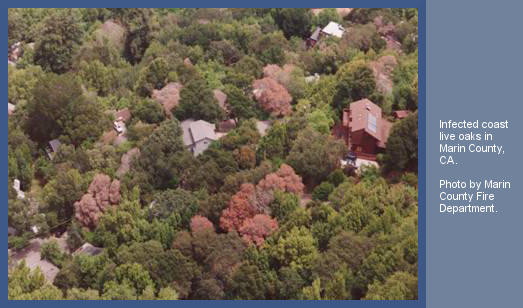 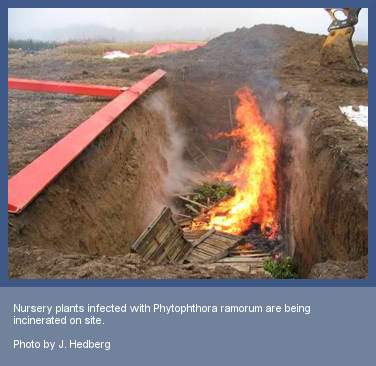 Forests and wooded landscapes are at greatest risk from Phytophthora ramorum. Because infected nursery plants could spread the disease to forests, it is very important to prevent Phytophthora ramorum from contaminating nurseries. Before the disease was identified and tracked, infected nursery plants from the West Coast were shipped to many other states. Now, plant movement from these areas is subject to regulation.

Phytophthora ramorum has impacted nurseries in several ways. West Coast nurseries shipping plants out of state must comply with federal regulations, which are covered in detail in following sections. The disease has also affected production practices and marketing. If a nursery is found to be infected with Phytophthora ramorum, infected plants must be destroyed, which can be very costly. 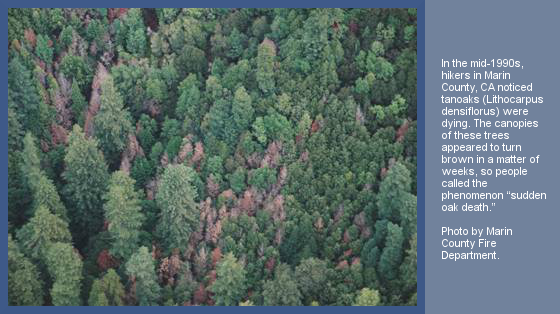 The disease was first observed in 1993 in Germany and The Netherlands on Rhododendron and Viburnum. In the United States, Phytophthora ramorum was first detected in California on oaks and tanoak in the mid-1990s.

The source of Phytophthora ramorum is unknown but we do know that United States forms of this pathogen did not come from Europe. Before the mid-1990s, there were no reports of this species in the United States or Europe.

Map current as of April, 2015. For updated information or to zoom in on particular locations, see www.sodmap.org. 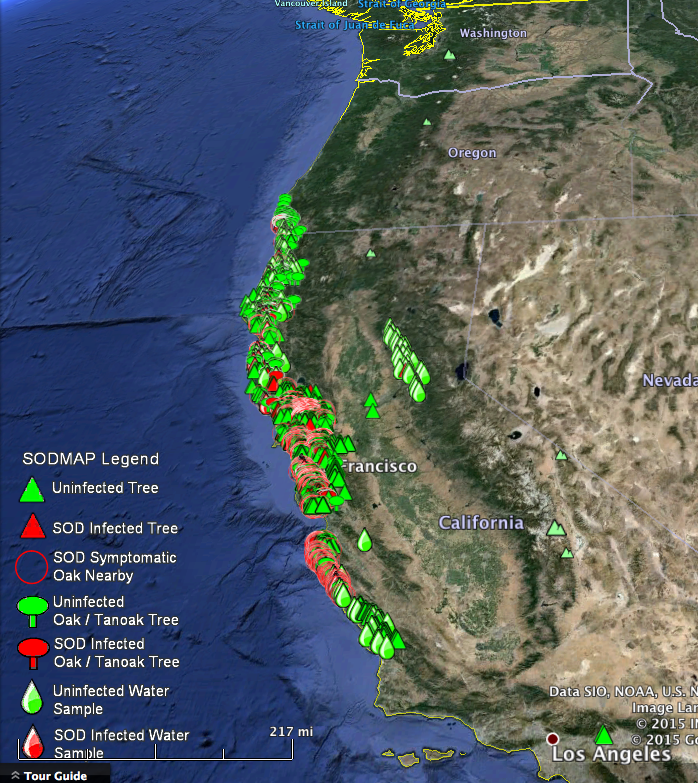 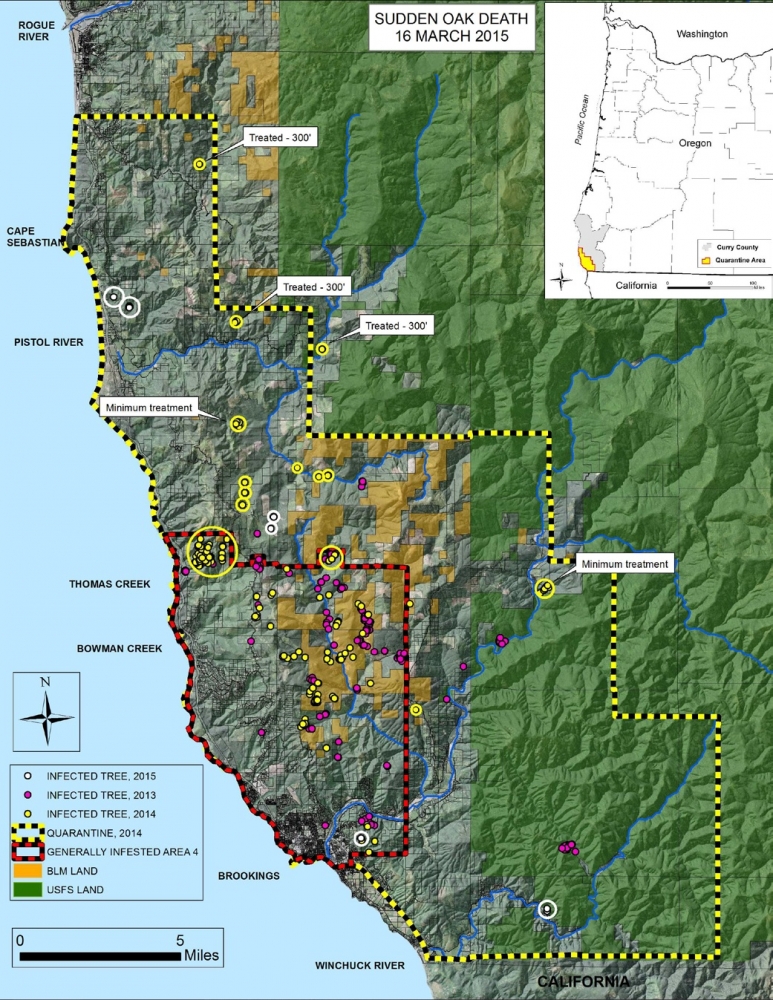 Because Phytophthora ramorum infects some species of oak, it is considered to be of greatest danger to eastern forests (see below), where oak is one of the dominant species. 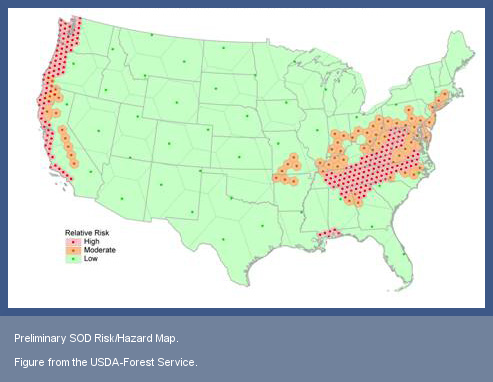 In Oregon, the wildland infestation now is limited to a small area in the extreme southwest corner of the state. As infected tanoak trees are found, they are cut, piled, and burned in an attempt to eradicate the disease. 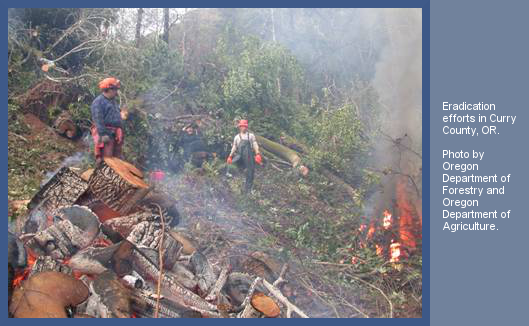 Symptoms and ID on Oak and Tanoak

Phytophthora ramorum causes two types of diseases, depending on the host. On members of the oak family (Fagaceae), it causes stem cankers that kill the host; hence the name “sudden oak death.”  These cankers often show the characteristic “bleeding” symptom, such as in the photos below and at right.

It is important to note that not all oak species are affected by Phytophthora ramorum. Oregon white oak (Quercus garryanna) has not become infected by this pathogen. 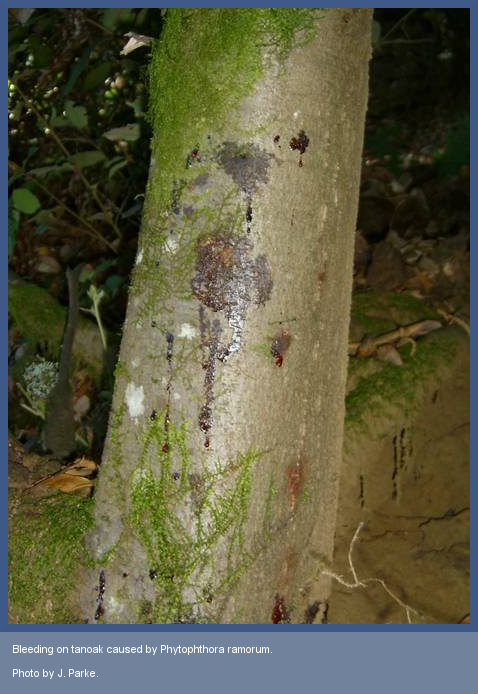 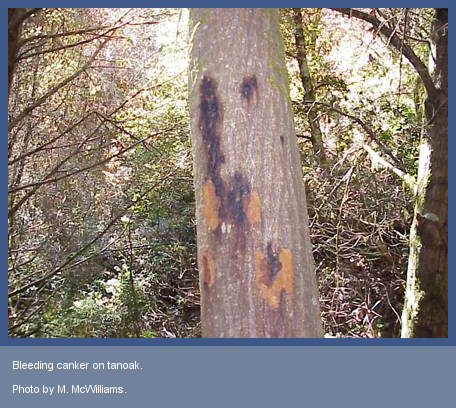 Symptoms and Identification on Other Hosts 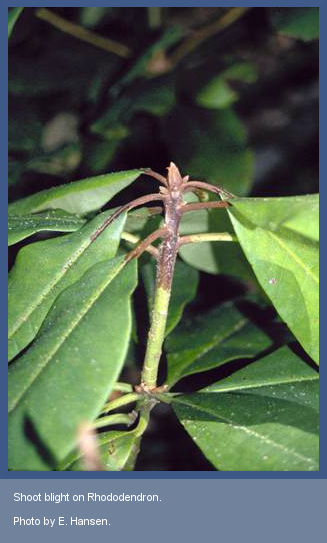 In contrast to the disease symptoms on oak and tanoak, on woody ornamentals we typically observe a range of foliar symptoms including shoot blight, shoot necrosis, and leaf spots or leaf blight. Roots may be infected but look healthy. 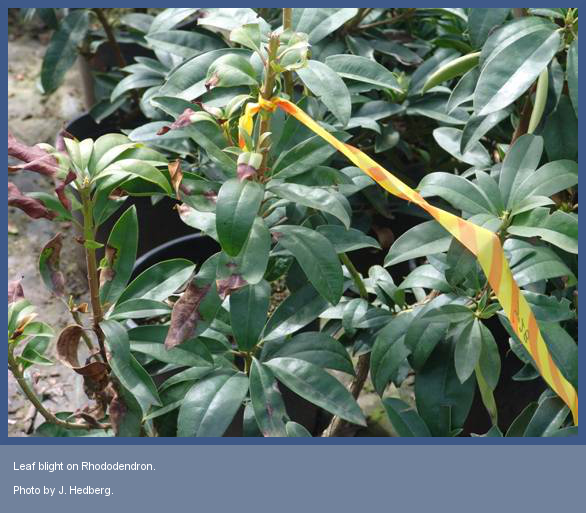 Many nursery plants are hosts for Phytophthora ramorum. The ornamentals most affected are, in order of importance, Camellia, Rhododendron, and Viburnum. Other important nursery hosts are Pieris, Kalmia, Magnolia, Leucothoe, Osmanthus, and Syringa. 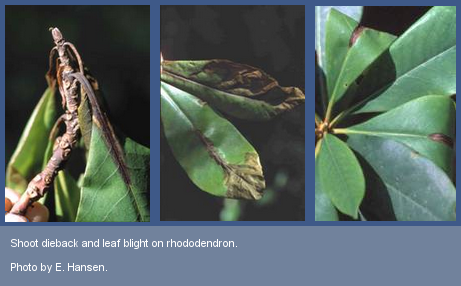 On Camellia, infected leaves may fall off the plant but  they continue to show typical symptoms of Phytophthora infection: namely, dark brown lesions with defined margins. 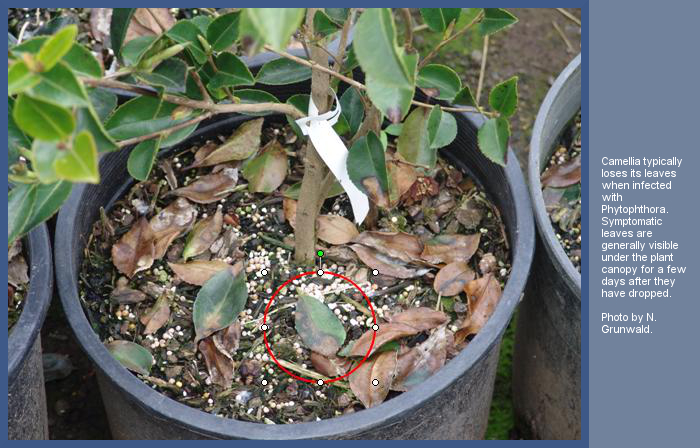 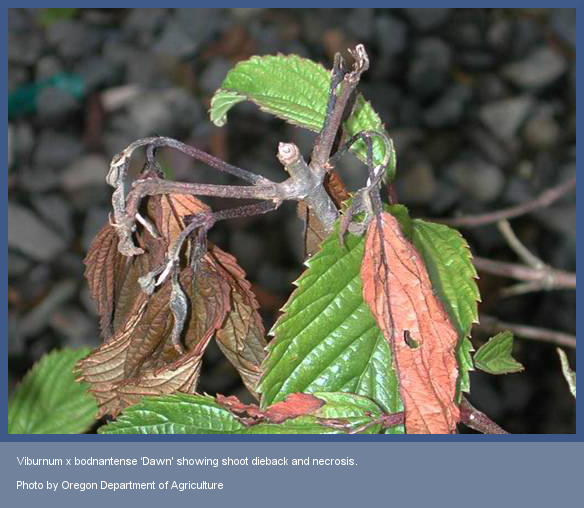 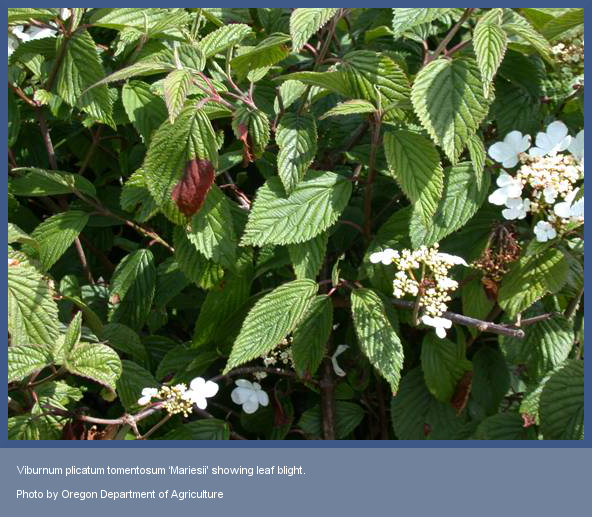 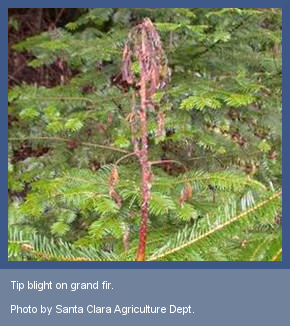 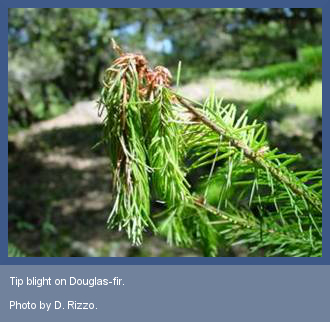 How Phytophthora ramorum Is Spread

Nursery plants infected with Phytophthora ramorum have carried the pathogen across much of the United States.

The U.S. Department of Agriculture Animal and Plant Health Inspection Service (USDA-APHIS) maintains a list (PDF, 92K) of regulated Phytophthora ramorum hosts and associated plants (HAP). More than 100 plant species are currently on this list. As new hosts for the disease are found, they are added to this list and are then subject to regulation.