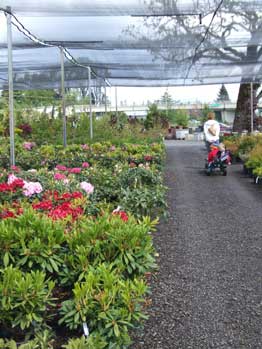 Oregon's nursery industry began with the first pioneers arriving via the Oregon Trail. Henderson Luelling arrived in 1847 with a wagon full of young plants, trees and seeds and settled in what is now the city of Milwaulkie. His friend, William Meek, came the following year with 20 varieties of grafted trees. Together, the two men started the first nursery of grafted plant materials on the Pacific Coast.

Within a few years, the nursery had over 60 varieties of trees local settlers could purchase for their homesteads. With the demand high for quality apples, other nurseries began and flourished, offering large varieties of fruit and ornamentals trees.

...and the industry has continued to thrive and grow. A lot of things have changed over the years. Today Oregon's nursery crops are quite varied and are shipped world wide. Those early settlers chose their location wisely...the fertile Willamette Valley continues to be the hub of nursery production in this state.