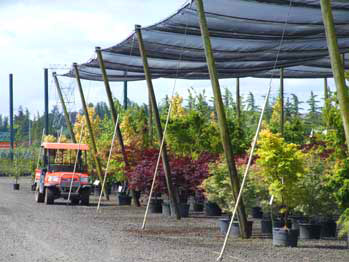 In 2007, the crop value of Oregon's greenhouse and nursery products topped $1 billion dollars; it is the largest commodity in Oregon agriculture. Oregon's grass seed industry is the second largest commodity in Oregon, but it produces only half of the crop value of the greenhouse and nursery industry. Oregon's nursery industry is the second largest in the U.S., second only to California. Oregon produces 11 percent of the nation's nursery crops.

2008's gross sales of  820 million, marked the first ever sales decline since officials started tracking sales in 1990. Unlike the late 90's, unfavorable new housing numbers and the recession has played a major role in the decline. Nursery experts believe as the economy picks up so will sales of nursery stock. Container grown plant material and green house crops, such as vegetable starts and bedding plants, have continued to do well suffering only slight declines during  this current economic down turn.

Even during current economic conditions, there is encouraging news. Oregon nursery growers continue to provide plant materials to other growers, distributors, and garden centers across country and beyond. Only slightly over 25% of all Oregon grown plants are actually sold in Oregon. The remaining 75% is sold through out our country and internationally as well.