Phytophthora ramorum is a serious pathogen of many ornamental and native plants grown in Oregon. The regulations described in this section have been designed to help prevent the spread of this pathogen. All Oregon nurseries should take the regulations very seriously. If your nursery is found with Phytophthora ramorum plant material, the USDA and the ODA will work with you to meet all regulations to eliminate the pathogen from your nursery, and to limit its spread to other nurseries. They will also recommend best management practices that will help prevent disease from occurring again.

Many details of regulations discussed in this section will change frequently. Please revisit website references regularly to obtain the most current information. 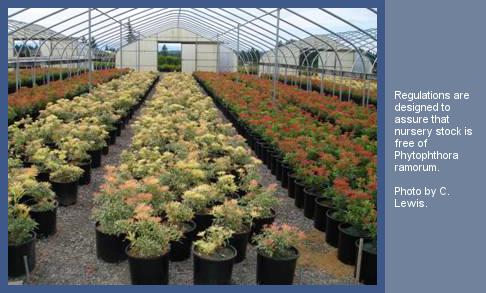 On January 10, 2005, a USDA Federal Order went into effect, regulating the movement of nursery stock from Oregon, California, and Washington nurseries. This rule has been updated several times since 2005, the latest being January 10, 2014.

The Animal and Plant Health Inspection Service (APHIS) has revised the P. ramorum domestic quarantine regulations relieving and/or imposing regulatory requirements for the interstate movement of host nursery stock from nurseries located in the regulated and quarantine areas in California, Oregon, and Washington. In addition, APHIS is defining regulatory requirements for nurseries in areas of the United States and its Territories outside the regulated or quarantined areas that test positive for P. ramorum and that wish to move regulated, restricted, or associated P. ramorum host articles interstate. These actions went into effect March 31, 2014.  In Oregon, a portion of Curry County is also under federal quarantine because P. ramorum has been found in the natural landscape.

For nurseries in the regulated areas of California, Oregon, and Washington: the revised regulations apply to nurseries shipping P. ramorum host plants interstate with the requirements based on the last time P. ramorum was detected at the nursery (March 31, 2011).

The Oregon Department of Agriculture (ODA) is required to maintain a list of nurseries who ship nursery stock out of state and who are at least annually inspected for the presence of P. ramorum.  The current list “Oregon Nurseries Approved to Ship Nursery Stock Out of State (Phytophthora ramorum) “ can be found on the ODA website.  Contact ODA at 503-986-4644 if you have questions. 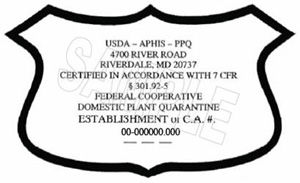 Nursery certification is provided only after all requirements of the inspection and sampling protocols have been met and a compliance agreement outlining all additional growing and shipping requirements has been signed.  A federal shield with a unique identification number will be issued to the nursery.  A copy of this shield must accompany each shipment of host plant material shipped.

Phytophthora ramorum has been found most often on Rhododendron, Viburnum, Kalmia, Pieris and Camellia in nurseries.  During the required nursery inspections, symptomatic samples may be taken for laboratory analysis.

All Oregon nurseries are required to notify ODA’s Plant Division of tree and shrub nursery stock imported into Oregon from any out-of-state source within two days of receipt. This information assists ODA personnel in monitoring Phytophthora ramorum host material imported to Oregon as well as plant material of other quarantine concern. Notification can be via mail, fax, or e-mail to:

If Phytophthora ramorum is detected in your nursery, the federal Confirmed Nursery Protocol (version 8.2 August 6, 2014) will be initiated immediately.

The goal of this protocol is to ensure that any infestations of this serious pathogen are found and completely eradicated.

Federal or state officials will notify you as soon as they determined that Phytophthora ramorum has been found at your nursery. An official "Emergency Action Notice" will be issued by the USDA. This document will outline the actions that you must follow. A copy of the Confirmed Nursery Protocol and a current host list will be provided for reference.

Trace Back and Trace Forward information

The requirements of the USDA-issued "Emergency Action Notice" must be strictly followed. 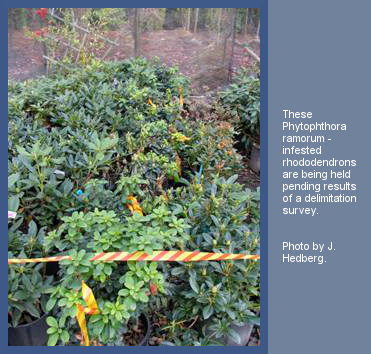 Disinfestation of the Nursery 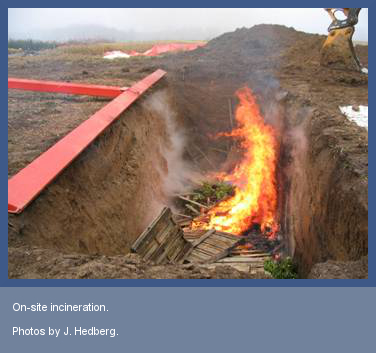