Carbon dioxide (CO2) is an important component of our atmosphere. It is used by plants during photosynthesis to capture and store energy from sunlight. The concentration of CO2 in the air never has been constant, however during the last century, levels of CO2 in the atmosphere have increased at an accelerated rate. This becomes important to mankind for two reasons.

First, since carbon dioxide is used by plants to capture and store energy, increasing concentrations of this compound probably have a fertilizing effect for plants. This has several important implications relating to plant productivity, water use efficiency and nutritional quality. In native ecosystems, differing abilities to use CO2 may lead to shifts in community composition and structure.

Second, carbon dioxide is one of those gasses which contributes to what is called the greenhouse effect, the warming of the earth's surface temperatures by the "insulating" effect of gasses such as carbon dioxide. There is considerable debate over the consequences of any such warming effect.

To help address this issue, this research center, along with several other Agricultural Research Service locations has undertaken a long-term study to measure the amount of carbon dioxide taken up and released by plants and soil on rangelands throughout the United States. Here at EOARC, we have established a study looking at the dynamics of CO2 flux on burned and unburned sagebrush rangeland. 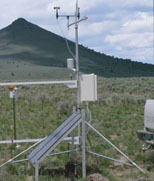 The study is still underway, however we are finding that these rangelands are acting as sinks for carbon dioxide for most of the year. What that means is that the plants take up more CO2 than is released by above and below ground respiration.

The picture to the right shows the equipment we use to estimate the direction and magnitude of CO2 movement between the atmosphere and surface. In a nutshell, the system measures carbon dioxide concentration at two heights, along with other needed information, and we then use these data to estimate the rate of movement toward or away from the surface.

If you are interested in this study, check these recent publications , or contact Ray Angell or Tony Svejcar .