The Eastern Oregon Agricultural Research Center at Burns is composed of both state and federal lands. Main offices and laboratory facilities are located on 640 acres of state land south of Burns. The state land is referred to as Section Five. The Northern Great Basin Experimental Range (NGBER) is our rangeland property. It is federally administered and encompasses over 16,000 acres. It is located about 35 miles west of Burns. The rangeland at NGBER supports a variety of plant communities dominated by western juniper, three subspecies of big sagebrush, two species of low sagebrush, and many of the grasses and forbs common to Intermountain and northern Great Basin rangelands. Improved pastures of crested wheat grass are also present.

Offices, laboratories, barns, and shops are located on the state property, at the Section 5 headquarters. Section 5 is also the location where most of our meadowland ecology and management research takes place. All the hay needed to support our livestock during winter is produced at Section five.

We have exclosures at NGBER which were established in 1936, and have been left untreated since that time. They provide a significant historical resource demonstrating successional changes over more than 50 years. Recently, rainout shelters were built so that scientists can investigate the effects of altered precipitation patterns on native plants.. 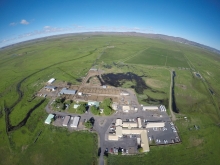