It is generally accepted that aspen stands in the Blue Mountains and Northern Great Basin are in an ongoing state of decline. In some cases only one or two trees remain in a stand, and it is reasonable to conclude that extensive stand loss has occurred during the last several decades. The purpose of this study is to investigate the status and trend of aspen stands in the Blue Mountains and evaluate the success of ongoing aspen rehabilitation methodologies. The primary objectives are:

From the stated objectives we hope to 1) develop a better understanding of the past and present status, and trend of aspen; 2) identify aspen rehabilitation methods now in use and evaluate their level of success; 3) identify factors leading to aspen decline; 4) develop a working partnership between EOARC, BLM and USFS to initiate an intensive study of aspen in the Blue Mountains and northern Great Basin that will provide managers with methodologies of rehabilitation that have a high expectation of success and increase the knowledge base of aspen ecology. 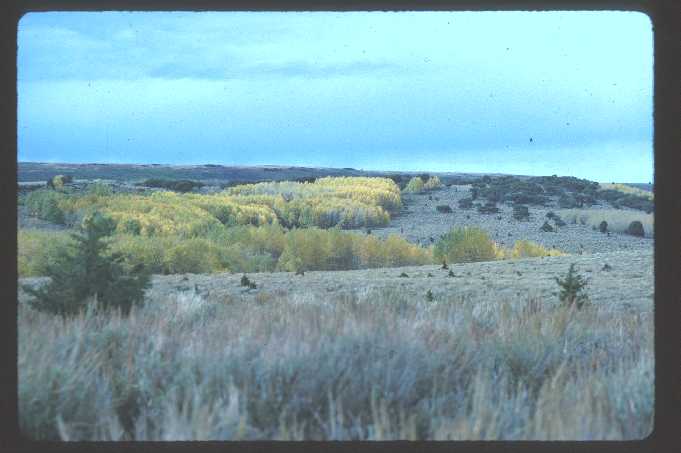 In the Northwest Great Basin, aspen communities uniquely contribute to the biodiversity of a semi-arid, sagebrush-dominated landscape. In this same region, western juniper is encroaching into aspen stands. Aspen stands below 2,133 m elevation were sampled in northwest Nevada, northeast California, and southeast Oregon for density, canopy cover, age, stand structure, and recruitment of western juniper and aspen. Soils and tree litter from both species were collected to analyze the effects of western juniper in areas previously influenced by aspen. Additionally, two large aspen complexes in southeast Oregon were intensively aged to determine disturbance (fire) frequencies.

Soils influenced by western juniper had a higher C:N ratio and pH; higher amounts of salts, lime, and sulfate; and lower amounts of magnesium, iron, copper, and manganese (p < .05). Aspen litter had a lower C:N ratio than western juniper litter (p < .05). Prior to 1870, the two major aspen complexes sampled had mean fire return intervals of 10 and 11 years. However, the most recent disturbance in either complex was 80 to 90 years ago. This lack of disturbance (fire) coupled with aspen stand decadence and low recruitment levels leaves aspen communities in the Northwest Great Basin vulnerable to western juniper encroachment and replacement.