The recent expansion of western juniper throughout eastern Oregon and northeastern California began during the late 1800s. Postsettlement juniper woodland expansion in the West has been most frequently attributed to the introduction and overstocking of livestock, the reduced role of fire, and optimal climatic conditions during the late 1800s. However, few studies have been conducted that directly support this idea. Only a handful of studies have documented mean fire intervals in the sagebrush steppe biome, and few if any have evaluated the chronosequence of the introduction of livestock, the reduced role of fire, and climatic conditions with the initiation of postsettlement woodland expansion.

This study was designed to: (1) document the chronology of western juniper age distribution; (2) document pre- and postsettlement mean fire intervals in a mountain big sagebrush steppe community; and (3) determine the proportion of large to small fires, and evaluate their relationship to growing conditions in years preceding and concurrent with fire events. The work is being conducted throughout central and southeast Oregon, and northeast California. 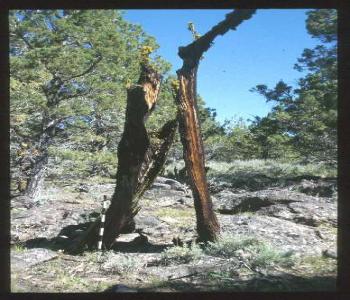 We are still constructing fire histories for many mountain big sagebrush communities throughout the study area. However, we have completed our work in the Chewaucan River Basin. In this 5,000 ha watershed we found western juniper expansion began between 1875 and 1885, with peak expansion rates occurring between 1905 and 1925. The fire record spans 1601 to 1996. Before 1897, mean fire intervals within individual clusters ranged from 12 to 15 years with years between fires varying between 3 to 28. Nearly one third of the fires in the basin were large and usually proceeded by one year of above-average growing conditions. Two fire events were recorded in the sparsely vegetated low sagebrush site, 1717 and 1855. The last large fire occurred in the study area in 1870 and the last small fire in 1897. The time sequence of wet climatic conditions between 1870 and 1915, introduction of livestock, and the reduced role of fire support the hypothesis that these factors contributed to the postsettlement expansion of western juniper.

We are in the process of developing fire histories for 7 additional sites. The fire record ranges from the early 1500s to present. Mean fire return intervals vary from 12 to 20 years, however, not all samples have been analyzed.

If you are interested in this study, check these recent publications , or contact Rick Miller at this location.