Bird Composition and Abundance in Juniper Woodlands of Oregon

Our ability to prescribe management actions to optimize the nature, extent, and distribution of favorable habitat conditions for bird populations across successional stages of juniper woodlands is extremely limited. Juniper woodlands have expanded at unprecedented rates during the past 120 years in the Intermountain west. In order to conserve or create optimal breeding habitats for a large number of birds, we must understand which successional stages are necessary, and to what extent.

The overall goal of this program is to investigate avian populations along a successional gradient of juniper woodland communities during breeding season and in the winter. Information will available for incorporation into planning prescribed burns, juniper tree harvest, and other landscape treatments across shrub-western juniper landscapes toward optimizing the extent and distribution of various successional stages for bird species. 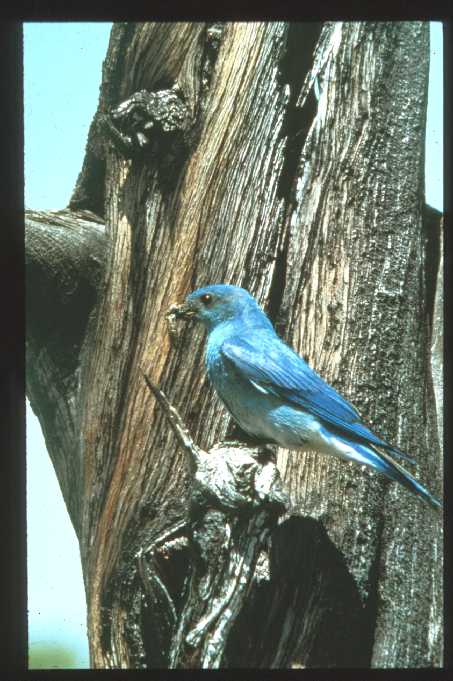 Breeding season sampling was conducted at 3 study areas in 1996, 7 in 1997, 5 in 1998, and 1 in 1999. In1996, we observed 2947 birds of 60 species. Diversity, number of species, and number of individuals observed was higher in the cut plots than in the uncut. When contrasting old growth woodland with adjacent shrubland, diversity was similar, while the number of species and the number of individuals was higher in shrub sites.

In 1997, we counted 5991 birds of 67 species. The 10 most common species comprised 2/3 of all observations. A similar pattern in density, abundance, and species richness emerged from the mid-aged woodland versus cut unit comparisons. Results from old-growth versus shrub site comparisons were somewhat inconsistent between the 2 study areas, although all measures were relatively high in both types of site. In a comparison of burned versus unburned shrubland in Nevada, little difference was found except that number of individuals observed was higher in burned than unburned blocks, possibly due to large aggregations of horned larks in the burned sites.

In 1998, 3298 birds of 64 species were encountered. Initial summarization indicates a similar trend in measures among treatments. We plan to compare changes over time with this year's data.

Winter bird surveys were conducted monthly in the pumice zone of central Oregon from December through April, 1998-99 in four community structural types. Structural types were: 1) recently burned (grassland), 2) shrub steppe, 3) mid-successional woodland (juniper –shrub steppe), and 4) open old growth woodland. Over the winter , 776 individuals of 24 species were enumerated. American Robins and Townsend's Solitaires were the most common species encountered with 132 observations each . The number of species observed in each monthly sampling session increased after January, peaking at 18 in April. The number of observations was higher in the latter 2 sampling periods. The number of species found in the 4 cover types was quite similar across the sampling period. However, there were large seasonal differences among structural types. During mid-winter the greatest abundance of birds were observed in the two juniper structural types, with few birds measured in the shrub steppe and grassland communities. The number of observations, however, was highly variable, with the most birds found in the mid-successional stands (275 birds). Within the grassland community, the number of birds and species seen generally increased through the winter. In the shrub steppe, no birds were observed during the second session. The Number observed was quite high during the last 2 sessions compared to the first 2. In the mid successional juniper woodland community, the number of species generally increased, while the number of birds observed showed no apparent pattern. In the old growth juniper woodland sites, the number of species encountered was apparently unrelated to time while the number of individuals observed generally increased

Work on this project will continue through winter 1999-2000.

For more information about this topic contact Rick Miller or Mitch Willis.