History and Responsibilities of the Greenhouse Facilities

History of the East and West Greenhouse Facilities 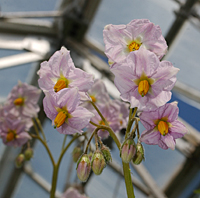 East Greenhouse is located at 2801 SW Campus Way on the northwest corner of the Oregon State University campus in Corvallis and is bordered by Cordley Hall on the east, Withycombe Hall on the west, Orchard Street parking lots on the north and Campus Way on the south. The facility was built in 1927 by Thompsonbuilt Greenhouses (of Portland, Or.) and currently serves as Resident Instruction, Graduate Research and Sponsored Research greenhouses. It consists of 19 glass greenhouse sections at 25,500sq.ft. There is a two story head house with the top floor used as a greenhouse resident apartment. The ground floor is the office for the greenhouse Manager and Crew.

West Greenhouse is located at 3201 SW Campus Way on the northwest corner of the Oregon State University campus in Corvallis and is bordered by Wiegand Hall on the east, USDA-ARS Horticultural Crops Research Lab on the west, Orchard Street on the north and Campus Way on the south. The West Greenhouse, also built by Thompsonbuilt Greenhouses, was done in eight stages from 1948 through about 1966. A major renovated to the greenhouse roofs was done from 2002 to 2009 with new glass and aluminum extrusion installed. The facility consists of 72 glass rooms, 58 fixed roof lab or head house rooms and covers an approximate area of 93,000 square feet (70,146 square feet under glass). West section 5 (3,240 square feet) was added in 1997.

Responsibility of Operations for the Greenhouses

The authority for both facilities ultimately rests with the President of Oregon State University. In operational practice, for several decades prior to 1979, East Greenhouse was managed and directed by the Head of the Department of Horticulture who supervised a Manager for East. West Greenhouse was operated separately under a Manager who reported directly to the Director of the Agricultural Experiment Station (AES). With management changes in 1979, both East and West Greenhouse operations were combined under one Manager directly supervised by the AES Director's Office. Since the responsibilities of the Director of AES and the Dean of the College of Agricultural Sciences were combined under the CAS/AES Dean, the Greenhouse Operations Manager has been directly supervised by a CAS/AES Dean's Office Associate Dean.

East Greenhouse is designated an "on-campus" building and, as such, the basic responsibility for utilities and maintenance rests with OSU Facilities Services.

West Greenhouse is designated an "adjacent building" facility by OSU Budgets to distinguish between distant CAS/AES Branch Stations and CAS/AES campus facilities which are not the responsibility of OSU Facilities Services (former term of "off  campus" per a 1958 era survey determination).  The CAS/ AES is fiscally responsible for operations of the West Greenhouses.