OAES Directors - A. B. Cordley 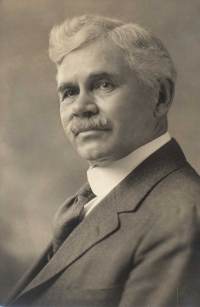 Arthur Burton Cordley was born on February 11, 1864 in Pinckney, Michigan. He was raised on his father’s farm and worked on it until he was nineteen. In 1883 he became a public school teacher until 1885 when he entered Michigan Agricultural College. As a student at Michigan Agricultural College, he played on the baseball team and was captain for two years. He also played tennis and football, and was manager of the student publication, president of a literary society, and president of the sophomore class. He graduated in 1888 and worked as part of the faculty, first as an instructor in zoology and then as an assistant entomologist, until he began work with the United States department of agriculture.

He came to Oregon State University as a professor of zoology and entomology at Oregon Agricultural College and as an entomologist and plant pathologist for the experiment station in 1895. He assisted in increasing the insect collection, which at the time was very small, by swinging an insect net on his way to work and on his way home for an entire year. In 1908, he became dean of the school of agriculture and from 1914 to 1920 he also became director of the experiment station. At Oregon Agricultural College, Cordley made three exceptional findings. His first discovery was the life history of the codling moth in Oregon’s temperate weather, and a method of control. His second discovery was the cause of apple

-tree anthracnose and a control method. The third discovery was the invention of the stock solution of lime-sulfur spray for the control of apple scab.

His presence at football practices and games was always assured, as he was an avid football fan and also chairman of the College’s board of athletic control from 1924 to 1931. Edwin T. Reed, former Editor of Publications at Oregon State University summed up Cordley as “a great and good man.” He was married and had one daughter, Mrs. Dorothea Cordley Muth. (MDH)