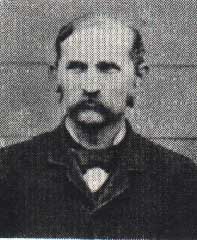 Edgar Grimm studied at Michigan Agricultural College and came to Oregon Agriculture College for his bachelor’s degree, graduating in 1880. Grimm started as an agriculturist at the Oregon Agriculture College and later became the first Professor of Agriculture in September of 1883. He was a professor of chemistry and agriculture, but also taught practical agriculture, fruit culture, botany, political economy, and organic and inorganic chemistry. He also supervised research being done over two acres. On July 2, 1888 he became the first director of the experiment station. Grimm wrote the first bulletin of the Oregon Agricultural Experiment Station in October of 1888. The bulletin included advice on farming and other agricultural information. The Experiment Station began research activities in 1888, but was not formally established until 1889. (MDH)