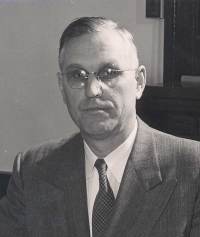 F.E. Price came to Corvallis, Oregon from Pomona, California. He and his high school sweetheart, Fern McCroskey, whom he later married, attended Oregon State University together and both graduated in 1922. Price majored in soils and agricultural engineering.

For a few months, he worked as an extension agronomist for Montana State College, but came back to Oregon State and became an extension specialist in soils and agricultural engineering. Later, he was named acting head of the Department of Agricultural Engineering, then assistant dean of agriculture and in 1950, dean and director.

During his time as dean and director of agriculture at Oregon State University, Price was lauded by the University’s President, James H. Jensen, as a “dedicated staff member, an imaginative executive, an acknowledged leader, and a key figure to the growth and development of agriculture in Oregon and the Northwest.” At Oregon State, Price reorganized the curriculum of the college of agriculture into three different groups, technology, business, and science. He also oversaw the growth of the seed crop industry that began at a mere $2 million and blossomed into a massive $28 million. He also convinced Western Oregon farmers that irrigation was the solution to high production and high value agriculture.

Another project he worked on involved the removal of tree stumps using explosives. At one point a particularly large stump barely missed a farmer’s barn. Price later maintained that the stump missed the barn by a narrow two inches because of his “expert knowledge of demolitions.”

His work in sprinkler irrigation was an international contribution. In 1952, the Brazilian government invited him to serve as a consultant on sprinkler irrigation to the state of Sao Paulo for two months. That same year he became the first person to be given the national “Water is Wealth” award of the Association of Sprinkler Irrigation.

Price also made many contributions within the community. He worked with the campfire girls program and received the Gulick Award for his service with the program. He had three children himself and usually ended his letters with a sincere “very truly yours, F.E. Price.” (MDH)