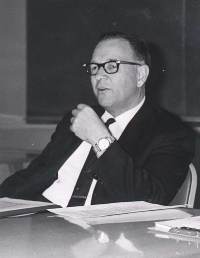 Wood was born on December 12, 1909 in Medford, Oregon as Gregory Burton Wood, but preferred being called “Burt.” He first came to Oregon State College in 1929 as a major in commerce and worked as a janitor. He later became a driver for William Kerr who was president of the college at the time. He drove Kerr around in a fresh, red, 1929 Cadillac limousine and said, “It turned out to be one of the most effective learning experiences of my life.” At one point, because it was the time of the Great Depression, Kerr even had to borrow $10 from Wood because the banks were closed.

From 1944 to 1951 he was in charge of teaching and researching agricultural marketing and management at Purdue. In 1951 he became head of the Oregon State College Department of Agricultural Economics and in 1966 became director of the Oregon Agricultural Experiment Station and associate dean of agriculture until his retirement in 1975.

Wood also participated in numerous organizations and committees including the National Agricultural Advisory Commission appointed by President Eisenhower. He was senior economist for the U.S. Department of Agriculture in Washington D.C. Wood was also extremely active in community affairs as president of the Rotary Club and member of the State and Local Affairs Council of the Chamber of Commerce and many more. He married Ramona Jackson in 1935 and had two children. His hobbies included collecting antique cars, clocks, and watches. (MDH)