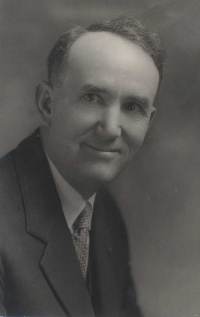 James Tertius Jardine was born in Cherry Creek, Idaho on November 28, 1881. He grew up on a farm and was trained in dry farming, irrigation farming, and handling of cattle, sheep, and horses. His family was Scotch-English. His father, James II, came to Idaho from Manchester, England in 1864.

He attended Utah Agricultural College where he played football for four years, was editor of the college magazine for two years, class president for two years, and involved in drama for four years. In 1905 he graduated with honor and was immediately appointed as an instructor at the College. He then spent the next two years teaching and doing graduate work at the University of Chicago.

Shortly after, Jardine left his teaching position to work on a difficult project in eastern Oregon for the government. The assignment called for the making of a predatory-animal-proof fence around a sheep grazing area. Jardine performed his task wondrously and was soon sent to Washington, D.C. where he formed an organization with the purpose of studying the preservation and usage of grazing lands in the national forests. For several years afterwards he was special lecturer for the University of Washington, University of Montana, Colorado College, and Yale University.

Later, he was invited to work for the United States department of agriculture and he did so until he was elected unanimously to become director of the Oregon Agricultural Experiment station in July of 1920. In an address before the Oregon Poultry Association, in December of 1920, Jardine stated that “The duties of the Station Director and the Station Staff are rather clearly (1) to do our best in cooperation with producers to determine and make known what the problems are, and (2) to do our utmost with the facilities and funds which the people of the state, through their representatives in the legislature decide the state can afford and therefore appropriate for such investigations.”

He was married to Gladys Caroon and had one son, James IV. His favorite activities included horseback riding, performing and listening to music, and golfing. (MDH)