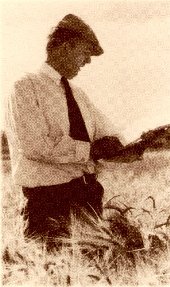 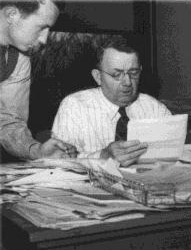 What's in a name? Quite a lot, when it happens to be George R. Hyslop, beloved and respected agronomist and Administrator, at what was then Oregon Agricultural College.

George Hyslop's career epitomized scientific enquiry, dedication and just plain hard work and spanned 35 years in Oregon -- from 1908 to 1943. He and his wife Susan came to Corvallis in the summer of 1908 after he had earned his bachelor's degree in agronomy at Ohio State College. Right from the start, it was a case of the "right man, in the right place at the right time." Crop production in Oregon at the turn of the century was far from the organized business venture that it is today. Farmers grew what they fancied, or what was available, and the quality of their product was widely variable. Professor Hyslop realized that some form of seed certification was basic to assuring quality crops, so he set himself the task of providing such a program. His efforts coincided with the development of federal grain standards during World War I. He visited warehouses all over the state and examined batches of grain, following which he headed a project at the college to produce pure strains of cereal grains for seed. The project was successful and the quantity of low-grade "mixed" wheat on the Oregon market dropped dramatically, from about 30% to 5% of the total shipped. Poor varieties were virtually eliminated from the trade. There were two lasting benefits to this program. Oregon's seed certification system was established, and arrangements were begun for co-operative studies with federal agriculture workers. Both have had positive and lasting effects on Oregon agriculture.

In 1916, Mr. Hyslop was appointed Professor of Farm Crops. He served in that capacity until 1929 when he took leave to study grades for cereal grains at the U.S. Department of Agriculture. Never one to sit at a desk if he could be out doing something, during the year's leave he visited most of the principal grain and hay markets across the country.

On his return to Oregon in 1930, Professor Hyslop continued his teaching and research. His classes were informative and popular, and from them came 20 county agricultural agents, as well as a number of other state and federal employees. So his thoughts and policies have been carried forward to future generations and are, in fact, still being applied. Some of Mr. Hyslop's students achieved high office. These included Max McCall, who headed the cereal department in the Bureau of Plant Industries inWashington D.C., Z.E. Cole, who was Dean of Agriculture at Kansas State College, and Z.E. Bear, who became technical director at the American Cyanamid Company's New Jersey headquarters. Other unforgettable products of the Hyslop program were Harry Schoth who headed a federal forage research project from his Corvallis office, and E.R. Jackman, a popular and effective extension agronomist for whom the present E.R. Jackman Foundation was named.

George Hyslop was an innovator, in the era before electronic data processing took much of the work out of developing new programs. He laid the foundation for a grass seed industry, a hop industry, and a fiber flax industry, all in Oregon. Recognizing problems due to Oregon's isolation from major market areas, he pioneered in shipping Oregon potatoes and surplus forage from irrigated farmlands by sea to the eastern seaboard. Some of his developments continue to flourish: Oregon's grass seed industry is "world class" and forage is now shipped not only to eastern states, but overseas, to Japan. Flax and hops have declined, but not because of problems in production, which Hyslop's studies showed was well suited to the states, but because of changing market demands.

On occasion, GeorgeHyslop was called on to help overcome effects of crises which had occurred in his adopted state. One such was the infamous "Tillamook Burn", that devastated thousands of acres of forest land, largely in Tillamook County, in the decade of the1930's. At an experimental area near Northrup Creek, he and others developed practices for the re-habilitation of burned-overland.

So, George Hyslop was a distinguished teacher, a dedicated research investigator and am able administrator, who left a mark on Oregon Agriculture that is still visible, half-a-century after his death. In 1950, in celebration of its100th year of publication, the Oregonian named Professor Hyslop as one of the100 people who had done the most for Oregon in that time span. But these accolades, although well and truly deserved, don't do justice to the man, himself. A number of people who knew him well have attested to his humility and his very human qualities. One of his biographers wrote, "George R. Hyslop was a man remarkably free from self interest." He went on, "Those who knew George Hyslop personally probably forget many of his (great) accomplishments before they forget George Hyslop, the man. He was the friend of every student and every individual with whom he came in contact. He was blessed with a gift of human understanding which made him an outstanding teacher and friend."These qualities were attested to by the outpouring of affection at the time of his death, in 1943. Without any formal announcement, money poured in, from agribusiness groups and from individuals, to memorialize an individual who had probably contributed more to Oregon Agriculture than any other.

Characteristically, George Hyslop died "with his boots on", while on a working trip to Klamath County to inspect seed potatoes, in July, 1943.

In the winter of 1943, then-Dean W.A. Schoenfield of Oregon State College's School of Agriculture, formed a committee consisting of farm people and College faculty to administer the Hyslop Memorial funds. It was intended that the funds would accomplish two purposes: they would honor the memory of a great scientist and teachers and, by supporting promising students of agronomy they would perpetuate the works that George Hyslop had done so well.

In 1950, the first Hyslop fellowship was awarded to William E. Hall, who at the time was Assistant Superintendent of the Sherman Branch Experiment Station at Moro. Mr. Hall was a former student of Professor Hyslop's, and the award allowed him to pursue research on micro-milling technology, which allowed wheat breeders to test milling qualities of small amounts of grain early in the breeding program.

The memorial fund has continued to operate, over the years, and a number of deserving students have benefited. In turn, their studies have been applied to the betterment of Oregon crop producers and ultimately to the benefit of the citizens of the state. Each year the outstanding senior in the Department of Crop and Soil Sciences has received an award funded by the Hyslop Memorial,
and varying numbers of undergraduate students have received cash grants. Outstanding students so honored over the past years have been Helle Goddick, Jim Fitzsimmons, Denise Horton, Dennis Gamroth, and Erica Fischer.