Arctostaphylos is a genus of woody, evergreen shrubs or small trees native primarily to western North America, from southern British Columbia into Mexico. One species, A. uva-ursi, as well as the closely related Arctous alpinus and Arctous ruber, are collectively referred to as bearberries and are found in circumpolar areas of North America, Europe and Asia. The various species are found in a wide range of habitats, from coastal areas, to chaparral and mountainous regions. 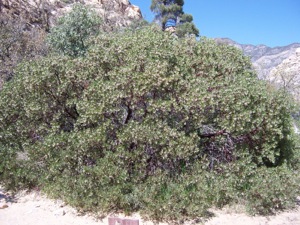 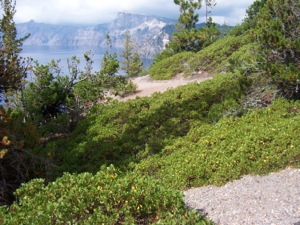 The common name of most species is manzanita, Spanish for “little apple”, which refers to the small rounded fruit, which is often green or in various shades of red. 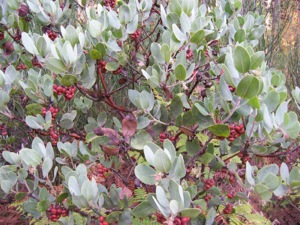 Because of the wide geographic distribution, the habit of manzanitas varies widely from prostrate, wide-spreading groundcovers to rounded shrubs to small trees. 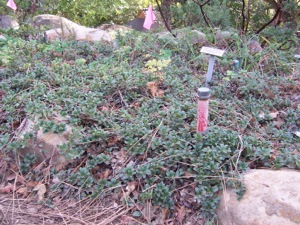 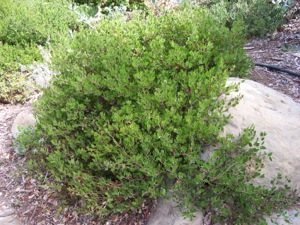 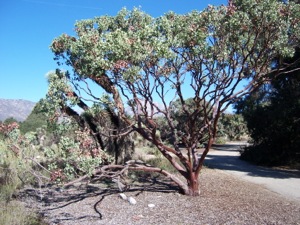 The larger-growing plants often have intricately twisted branches, a structure which may be enhanced by a beautiful, polished mahogany-like bark. 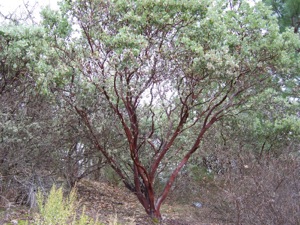 Although the leaves on all manzanitas are simple, the color and texture varies considerably from the small glossy green leaves of A. uva-ursi, to the large, vertically-orientated leaves of many species from hot climates. Leaf color is often glossy green, but some species and cultivars feature hairy and/or waxy leaves which take on a blue or silvery appearance. 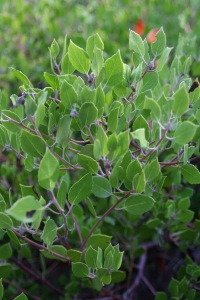 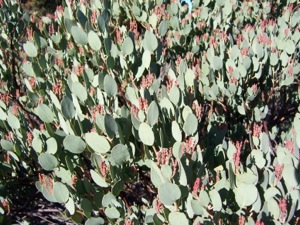 In some cases, the new foliage takes on reddish tints which add to the ornamental appeal of the leaves. 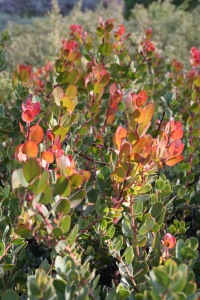 Flowers typically appear in late winter or earliest spring and are shades of white or pink. 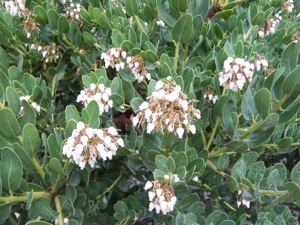 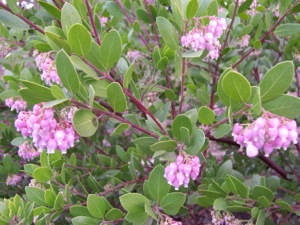 The flowers provide a source of forage for bumblebees during the early part of the growing season. 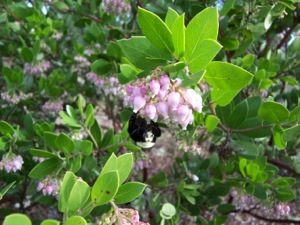 The best known of the Arctostaphylos, and the most widely grown by far, is A. uva-ursi, popularly known as bearberry or kinnikinnick. This species has a circumpolar distribution and typically forms a ground-hugging evergreen mat. 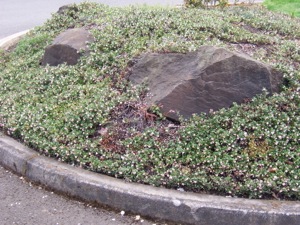 Several forms have been selected and introduced to cultivation, and in Oregon and Washington these are widely utilized as groundcovers, sometimes in situations where considerable drought tolerance is required. Unfortunately, kinnikinnick is not always a very vigorous or successful groundcover, as it often suffers, particularly west of the Cascades, with disease and pest problems. 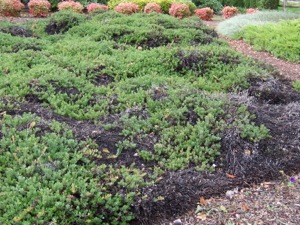 This species is also very low-growing, and as a result may not suppress weeds as effectively as a taller groundcover. In addition, the most commonly grown form, A. uva-ursi ‘Massachusetts’, originated from a population in the northeastern U.S. and is not adapted, as western species and selections are, to summer drought. Other selections of this species such as ‘San Bruno Mountain’ perhaps offer better disease and drought tolerance but have not been generally available.

Beyond A. uva-ursi, none of the many other manzanitas are used to any extent in western Oregon landscapes except by enthusiasts. This even includes the manzanitas native to Oregon, of which there are quite a number (see the Oregon plant atlas at the Oregon Flora Project website). A large number of species are native however, to dry regions of the western U.S, although they have not been utilized in Pacific Northwest landscapes. Many of these are used successfully as groundcovers in California in landscapes where drought tolerance is required. These include A. edmundsii, A. hookeri and A. nummularia, as well as a number of selections or hybrids, including ‘John Dourley’, ‘Pacific Mist’ and ‘Emerald Carpet’. These are either not currently utilized in the Pacific Northwest, or used very rarely. Taller shrub species such as A. densiflora, A. manzanita and A. pajaroensis are similarly unused, even though they could form valuable components of genuinely drought-tolerant landscapes.

The reason why these plants are not used is because a near-complete lack of information about their growth, hardiness, pest resistance or other landscape characteristics in the PNW. As a result none are generally available in the wholesale trades, even though they may have been grown on a limited basis successfully by enthusiasts and retail nurseries.

To help to address this situation, an evaluation of these plants was begun at the OSU North Willamette Research and Extension Center in Aurora, OR.  Seventy-five cultivars and species selections were planted out in a 0.5-acre plot for a multi-year evaluation. The plants were obtained as cuttings from local nurseries to some extent, but the majority of the collections originated with nurseries and botanical gardens in California. Cuttings were taken in December 2010 from these sources and returned to NWREC. The cuttings were prepared with a 1:5 solution of Dip’N Gro™ and stuck in trays with removable clear plastic covers in a 66% perlite, 33% peat mix. The trays were placed with covers on bottom heat until rooting was evident, at which time the plastic covers were removed. Cuttings were potted on in April 2011 into 5.5” pots into a media composed of 33% Fine Bark,  33% Peat Moss and 33% Pumice, with an added fertilizer starter charger, buffering materials, trace elements, and wetting agent. Each pot was fertilized with 3g Apex 19-6-12 (5-6mo formulation). The pots were grown on outdoors through the summer until planting in September, 2011. The evaluation site consists of rows approximately 350’ long, running north to south and separated by 12’. Grass alleys run the length of each row, creating an open planting area approximately 5’ wide. Soil is a Latourell loam. Four plants of each cultivar or selection were planted in a completely randomized design with plants separated within the row by 5’. Plants were hand-watered at planting and were then overhead watered until reliable rainfall began in October. After this time, no further supplemental water or fertilizer was applied to the planting. In addition, fungicides, insecticides or other pesticides were not used at any time to control diseases or pests, and no pruning was done to the plants. The goal is to assess landscape performance in a “low-input” system. Data to be collected include growth, flowering, cold injury and any pest or disease issues that arise, as well as an assessment of the overall landscape appearance of individual plants. 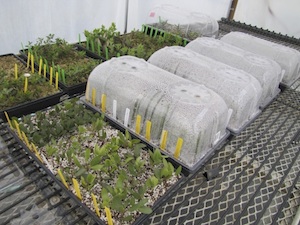 Cuttings of manzanita being rooted in April 2011. 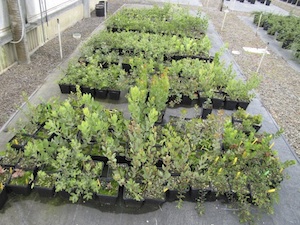 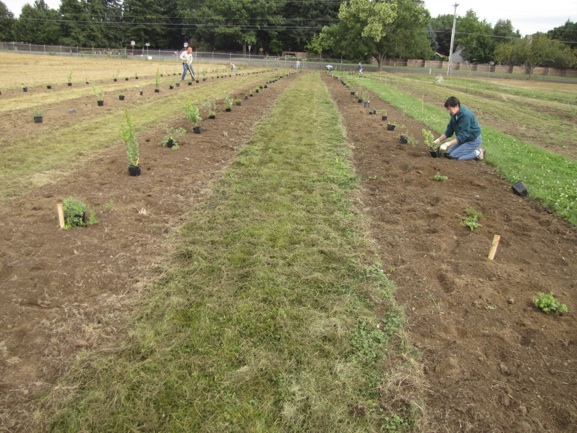 Planting the evaluation in September 2011.

Weather data for the evaluation is provided by a Bureau of Reclamation Agrimet station at NWREC, located only 120’ from the west edge of the planting. Low temperatures for the 2011-12 and 2012-13 winters were quite mild. In both cases, the low temperature was 24oF, observed on December 13th and 22nd, 2011 the first winter, and on January 2nd, 12th, 21st and 22nd the following winter. These very mild temperatures have so far not caused noticeable damage to the foliage or stems of any of the plants in the evaluation. Some damage to flowers, specifically those of A. refugioensis, was observed in February 2013, following the low temperatures observed the previous month. This turned out to be one of the earliest-flowering plants in the trial, being in bloom by December. These temperatures are evidently cold enough to injure to flowers of at least some of the plants in the trial. It should be noted that Arctostaphylos are not all particularly precocious plants and many of the plants in the trial had yet to flower after 2 full growing seasons so it is not clear how many other cultivars may share this susceptibility. 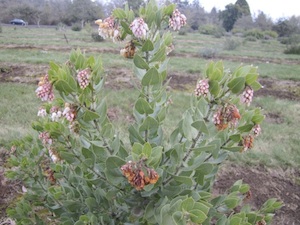 Injury of flowers of A.refugioensis, January, 2013. 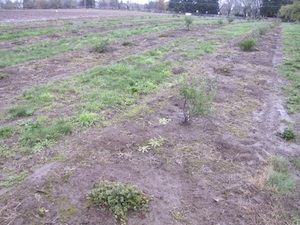 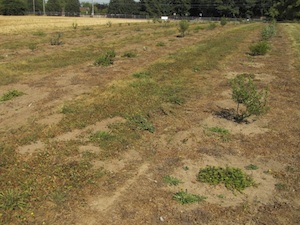 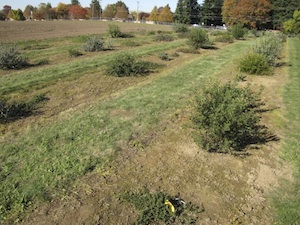 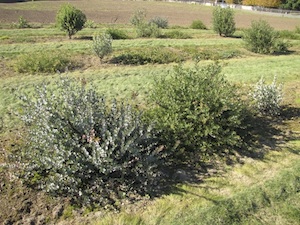 Unlike the previous two winters, which had seen very mild conditions which had caused no visible damage to the various cultivars in the evaluation, the weather turned sharply cold in western Oregon in early December, 2013. Low temperatures at the North Willamette Research and Extension Center in Aurora dropped to 10°F on Dec 8th and 11°F on December 9th.  Prior to this there had been numerous nights in late November where temperatures dropped into the high to mid-twenties and given this, and the occurrence of the two cold nights in the middle of the dormant period, as well as the fact that the plants were now well-established, it provided a legitimate opportunity to assess comparative hardiness of the cultivars in the evaluation. A visual estimate of damage to the plants was done on January 17th, 2014, 5 weeks after the cold event. Weather during the period after the cold event had been fairly mild, which allowed for good symptom development. Plants were evaluated on a 1-5 scale, with 1 equaling no damage; 2 equaling minor foliar discoloration or damage; 3 equaling leaf or stem injury to outer 30% of the canopy; 4 equaling leaf or stem damage to outer 60% of the canopy; and 5 equaling damage to the leaves or stems on the entire plant. 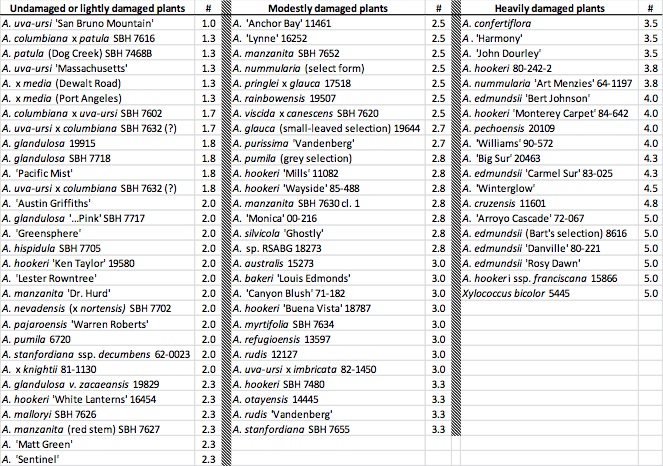 Not surprisingly, cultivars of the widely-distributed and cultivated A. uva-ursi were among the least damaged plants in the evaluation. Hybrids of this species with other Pacific Northwest native species such as A. columbiana also fared well. Other species which had a number of cultivars represented included A. hookeri and damage to these varied considerably. As can be seen, one of the hardest-hit species was A. edmundsii, all of whose cultivars were heavily damaged.

These results should be considered preliminary, as the data were collected in mid-winter and with the onset of warmer weather in spring a better idea of damage will be possible. Also, additional damage to some cultivars is still possible from cold weather expected on February 7-11, 2014.

Photos below were taken at the time of the cold hardiness evaluation and show the variation in damage within the plot. 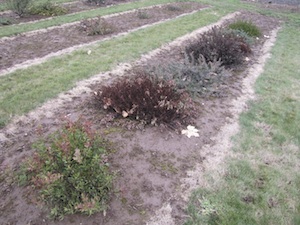 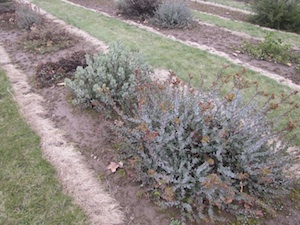 The most comprehensive work available on manzanita is by the late Phillip Wells, Manzanitas of California. The book is available for $60. For a copy of the book, contact Dr. Anke Wells, ankewells@yahoo.com.

The Oregon Plant Atlas of the Oregon Flora Project