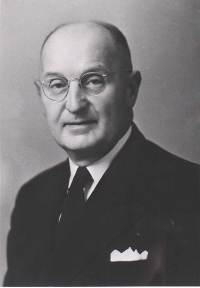 The eventful life of William A. Schoenfeld began in Milwaukee, Wisconsin, September 15, 1888. After graduating from high school in 1904, he found work with the Milwaukee Traction Company and worked with the company for a year until 1905 when he took a civil service examination, passed the exam, and got a job with the United States Reclamation Service. He moved to Roosevelt, Arizona where he worked on geodetic surveys, topographical surveys, and construction engineering, helping to build the Roosevelt dam.

In 1910, he returned home and enrolled in the University of Wisconsin and majored in Agricultural Economics. He concentrated mostly in the field of biological and bio-chemical sciences, but also did work in animal husbandry, animal breeding, bio-metrics, dairy husbandry, and dairy manufacturing. He graduated after only three and a-half years and received his B.S.A. degree. During his junior and senior years at the University of Wisconsin he also managed to work as an instructor in agricultural economics, executive secretary to the dean, and director of the college of agriculture.

In 1920, he began studying for his master’s degree in business administration at Harvard University. From 1922 to 1924 he held three positions, assistant chief of the bureau, chairman of the United States Crop Reporting board, and economic advisor with the United States Department of Agriculture, Bureau of Agricultural Economics.

Europe became his next adventure in 1924 when Schoenfeld left the United States to act as Agricultural Advisor to European and American embassies. He also undertook graduate work in economics at the University of Berlin under the famous Professor von Sering.

His next position came in 1926 when he returned to the United States and served as economic advisor in the New England milk zone dispute and also began work on his thesis for his master’s degree in business administration at Harvard University. Unfortunately, he had to postpone this work due to unknown reasons.

He first came to the West in 1929 as a regional representative of the Federal Farm Board, which had offices in Portland and Seattle. Corvallis became his next destination when he became Dean of the School of Agriculture and Director of Experiment Stations at Oregon State College in 1931 after leaving his position in Portland.

He married Mabel Wagner of Milwaukee in 1913 and together they had four children. Schoenfeld had an interesting hobby of collecting autographed pictures of politicians. His collection included ex-presidents Calvin Coolidge and Herbert Hoover. He also loved good books and music. (MDH)