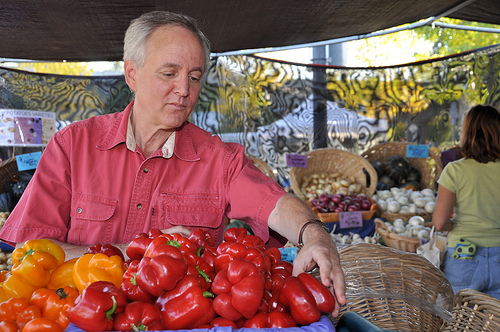 An agricultural economist at Oregon State University has hit the silver screen in a new documentary that examines and promotes the local food movement.

In the film "Ingredients," Larry Lev discusses the benefits and costs of buying food from local producers. He says that although some local products may cost more than food transported from large-scale commercial operations, the extra expense can be worth it. The taste can be superior, and the money shoppers spend stays in the area and contributes to the vitality of the community, he says. By shopping locally, people are also keeping agricultural land from being developed and they're establishing close relationships with farmers and fellow consumers, he adds.

"In the end, it comes down to choices. Price is one aspect that consumers take into account, but it's not the only one and often not the most important one," says Lev, who was filmed on campus.

Lev, who has worked at OSU for 25 years, specializes in agricultural marketing and alternative food systems. He also works with colleagues in the OSU Extension Service's Small Farms Program
(http://smallfarms.oregonstate.edu/) to develop and strengthen farmers markets. He was asked to appear in the documentary because he had worked with one of the members of the film crew on various projects, including workshops to match chefs with farmers.

"Larry gave us a lot of great information to work with," said the film's producer and cinematographer, Brian Kimmel, who lives in Portland. "The most important thing he did was describe how this whole economics system works with the local food movement. A lot of the people are looking at this and saying, 'Yes, this is something we want but it's too expensive.' Larry's experience shows otherwise. It was great to have Larry to fall back on and say, 'This does make sense and here's how.'"

"Ingredients," which premiered in Germany and won a Silver Sierra Award in the documentary category at this year's Yosemite Film Festival, shows the farmers and chefs around the country who are revitalizing the connection between food and the land. It features diversified farms of the Willamette and Hudson River valleys, the urban food deserts of Harlem, and the kitchen of Alice Waters.

To buy a DVD or find out how to organize a screening of the film in your community, go to http://www.ingredientsfilm.com.

About Oregon State University: OSU is one of only two U.S. universities designated a land-, sea-, space- and sun-grant institution. OSU is also Oregon's only university designated in the Carnegie Foundation's top tier for research institutions, garnering more than 60 percent of the total federal and private research funding in the Oregon University System. Its more than 20,300 students come from all 50 states and more than 80 countries. OSU programs touch every county within Oregon, and its faculty teach and conduct research on issues of national and global importance.