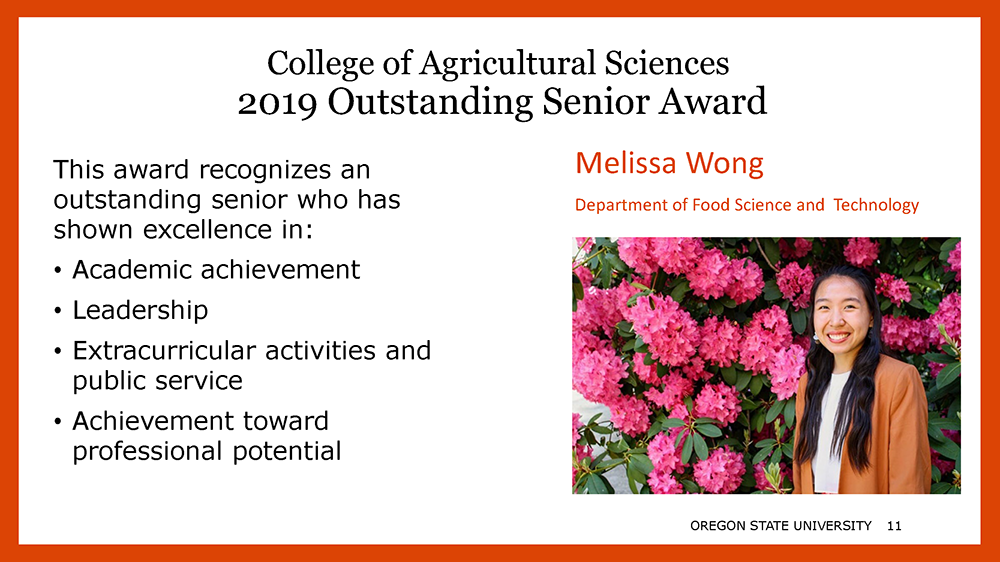 This year’s recipient of the 2019 College of Agricultural Sciences Outstanding Senior Award is Melissa Wong, a senior in Food Science and Technology.

Growing up Malaysian-Chinese in Borneo, Melissa speaks of the variety of local and fusion delicacies she experienced. She notes that her exposure to different food cultures has led to her curiosity and appreciation of food, and eventually, her decision to go into the food industry and become a food business owner. Melissa came to OSU through the INTO Pathway Program. She credits the INTO program with helping her to adapt to OSU and her own desire to expand beyond academics drove her to be an active member of OSU’s community.

….Melissa joined Dr. Juyun Lim on a project investigating the impacts of military service on sensory functions.  Melissa impressed Dr. Lim as she contributed to developing the research protocol for an IRB approval. Dr. Lim appreciated her enthusiasm for learning science as well as her exceptional project organizing skill. Melissa was invited to take over the project and plans to complete it this term.

…Melissa has a great interest in leadership roles as evidenced by her record. She has served as a Vice President Food and Fermentation Science Club and President of the Malaysian Student Association at OSU. Melissa is a Leadership Academy Fellow. She is an active member of Food Science and Technology’s very competitive College Bowl Team that last year scored 4th in the Nation. She is active in Sigma Alpha, is in the campus band, and the Epic Movement that cultivates genuine friendships. She also volunteers as TA in Chinese.