Sonchus oleraceae
Family:
Asteraceae
Life Cycle:
Annual
Plant status:
Weed
Habit:
Annual sowthistle initially forms a rosette of deeply lobed foliage. Rosettes emerge mid winter, and flowering stems emerge from the rosettes in late winter or early spring. Annual sowthistle eventually forms an erratic, highly branched, and somewhat columnar habit. Plants grow up to 4 feet in height. Rosette foliage is deeply lobed with serrated margins. It varies slightly in appearance from foliage that appears later on the upright stems. This cauline foliage, or stem foliage, is deltoid in shape, clasping the stem, and with shallowly pointed lobes on the margins. Foliage and stems are sometimes colored an intense shade of magenta and release a milky sap when broken or cut. Despite its pointed thistle-like appearance, foliage is generally soft to the touch.
Flowers:
Annual sowthistle blooms in late spring and into the summer months. Flower heads are approximately 1 inch in diameter and are composed of numerous yellow ray flowers, with no disk flowers. They occur in clusters called corymbs. Seed heads are flattened sphere-shaped. Seed are attached to a white cotton-like pappus that aids in wind dispersal.
Favorable environments:
Container
Field
Favorable environment notes:
Annual sowthistle grows well in cultivated agricultural sites such as field grown ornamentals , vegetables crops and gardens. It can be found in other disturbed areas along roadsides, riverbanks and poorly maintained residential areas. It prefers sunny, fertile areas with adequate moisture, but will also tolerate wet or saturated areas. Wet conditions are favorable for germination. Letting the surface dry between irrigations may reduce establishment. Spring tillage will significantly reduce the establishment of sowthistle.
Dissemination:
Each plant can produce approximately 6,000 seeds which can remain viable for many years. Seed heads are flattened and spherical. Seed are attached to a white cotton-like pappus that aids in wind dispersal. Seeds can also be spread by water, birds and other animals as well. Seed survival is short on the soil surface, usually less than one year, but much longer if buried. Manage seed production unless plants producing seed are not within your ‘jurisdiction’.
Foliage:
Cauline foliage is deltoid in shape, clasps the stem, and has shallow pointed lobes. Despite its appearance, it is not prickly or spiny, and does not hurt to touch or squeeze.
Management link:
PNW Weed Management Handbook
Weed Control in Nursery Field Production
Of interest:
Annual sowthistle (Sonchus oleraceae) is sometimes confused with its relative prickly sowthistle (Sonchus asper). A comparison of their stem foliage will help in distinguishing between the two. Annual sowthistles basal lobes wrap around the stem and point straight back while prickly sowthistles basal lobes wrap around the stem, but curl down the stem-See image 6.

This is a very common species in Oregon field nurseries, and is becoming more common in container crops. Seed are air-borne, thus local sanitation around the nursery is imperative for effective control. 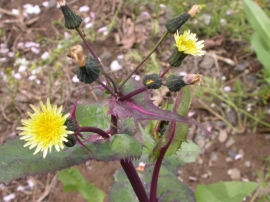 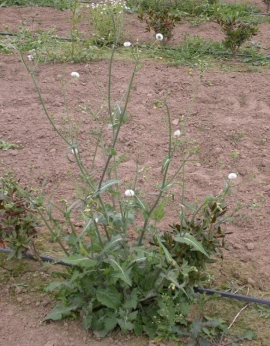 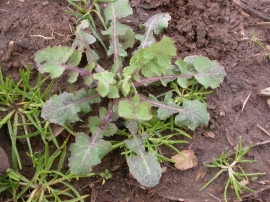 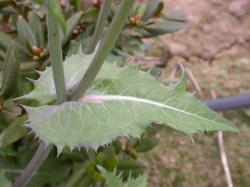 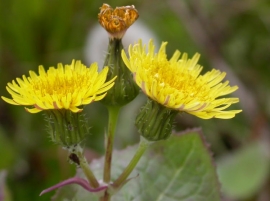