Veril “Van” Volk passed away on May 19, 2021 at the age of 82 at home in Corvallis, Oregon. He was born November 18, 1938 in Montgomery, Alabama and spent his childhood in Auburn (AL), Wooster (OH), and Worthington (OH). Van earned his Boy Scout Eagle Award in 1954 and graduated from Worthington High School in 1956. He received his B.S. and M.S. degrees in Soil Science at Ohio State University in 1960 and 1961, respectively. He served in the Air National Guard and was activated to Germany in 1961-1962. Van followed in the footsteps of his father and two uncles to earn his doctorate in Soil Science at the University of Wisconsin in 1966. He joined the faculty at Oregon State University in 1966, where he taught soil chemistry and continued as Associate Director of the Oregon Agricultural Experiment Station. He enjoyed his work travels abroad (Kuwait, Albania, India, etc.) and throughout the U.S. He retired in 1998 and was elected a Fellow of the American Society of Agronomy.

Van married Doris (Mangum) on September 7, 1968. They had three daughters, Gayle, Beverly, and Carol. Van’s most treasured memories were of his daughters and their accomplishments. Van and Doris enjoyed traveling in the Pacific Northwest (especially the Oregon coast) and hiking and visiting with friends in Arizona. Van loved visits from his daughters and grandchildren. A favorite pastime was cultivating and crossing iris.

Van is survived by his wife Doris, daughters Gayle and Carol (Adam Smolinski), and brother Bob (Shari) Volk. He will join their daughter Beverly and parents, Alice and Garth Volk, at Oaklawn Cemetery in Corvallis.

Formal services are not planned at this time. His family requests that donations in Van’s memory be made to Grace Lutheran Church or Lumina Hospice, in appreciation of their support during his final weeks with cancer. Arrangements were handled by McHenry Funeral Home. 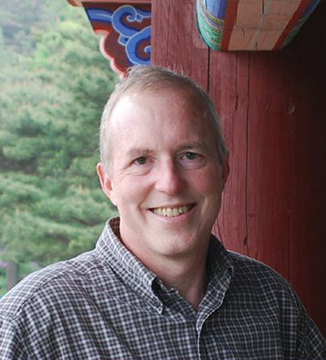 Dr. David Myrold passed away July 15, 2021 in Corvallis.  Dave was a Professor of Soil Science in the department from 1984 until his retirement in July 2021.  He is survived by his wife Jackie, sons Alan and Kirk, and a daughter, Becky.

Dave had strong interests in soil biology and ecology.  Among the principal topics investigated by Dave were the autecology of Frankia in soil, including population dynamics and biological diversity, nitrogen cycling in forest ecosystems and the linkages to plant productivity, and the role of microbial biomass as a sink and source of available nutrients.  He worked on the development of molecular probes for detection of soil microorganisms and used isotopes to measure the dynamics of the nitrogen and carbon cycles.

He taught courses in soil biology, forest soils, soil ecosystems, soil microbial ecology, stable isotopes and others over the span of his career.  Forty-seven students completed M.S. and Ph.D. degrees in Soil Science under his guidance.

Dave was elected fellow of the America Association for the Advancement of Science (2020), Soil Science Society of America (2001), and American Society of Agronomy (2000).  He was active in many societies and organizations but was most strongly affiliated with the Soil Science Society of America.  He was honored by the SSSA with the Soil Science Research Award in 2007 and he served in many leadership roles in the SSSA, most notably as Editor and Editor in Chief.  Dave was the recipient of this year’s College of Agricultural Sciences’ Agricultural Research Foundation Distinguished Faculty Award.

"Work hard with a purpose."

It was a pleasure to sit down with OSU Horticulture Professor and Viticulture Extension Specialist, and Leadership Academy mentor Dr. Patty Skinkis. Dr. Skinkis leads the statewide viticulture extension program, teaches undergraduate production courses, hosts an applied research program for graduate students, is a member of the Oregon Wine Research Institute, and has been a mentor in the Leadership Academy for several years. Faculty mentors are paired with current cohort students for the entire program year, providing support, feedback, and encouragement as students pursue their educational goals. Students are required to meet with their mentor at least once a month, however many dyads meet even more regularly and continue their relationship long after the official mentoring period.

Growing up on a dairy farm in Wisconsin, and one of seven children, Dr. Skinkis’ first memories of having to show leadership were taking care of her younger siblings while her mother and father tended to the farm. She recalls with great nostalgia her parents philosophy of doing the best you can to benefit the most people. A philosophy she would carry with her as she found her niche in food crops, and eventually grapes. After taking an internship in Extension, she realized she loved meeting the needs of industry, understanding their production concerns, and providing outreach related to one of the top ten commodities in the state.

Although hugely successful, juggling all of her roles is no easy feat. One of her biggest challenges is finding the time to dedicate to the myriad outputs required of her including research, teaching, mentoring, and extension outreach. She encourages young professionals to begin to practice managing their time - determining what can be triaged, delegated, or declined. She manages her cyclical work expertly, but cautions young career professionals about expecting to be passionate about every aspect of their professional life. "There will be times when you're working outside your scope, and you're not necessarily passionate about it, but not everything is fun. You may have to do things that you don't like. In the end though, you will understand the purpose. You're never too high up the ladder to do what needs to be done."

When we talked about the Leadership Academy, a program she has served over a decade as a mentor for, she said leadership education is important because good leadership skills are hard to find. Often times people feel they are entitled to a leadership role because of years worked or the rank they hold. Rather, there are innate skills that need to be honed in to be effective, and that's where the Leadership Academy comes in. She says "Every year students ask questions I haven't thought of before. We work through their professional development plans and I get to share my experiences dealing with challenges. One of the best pieces of advice I could give is to keep a mentor after the Leadership Academy. Look for someone you can look up to, bounce ideas off of, and who inspires you." 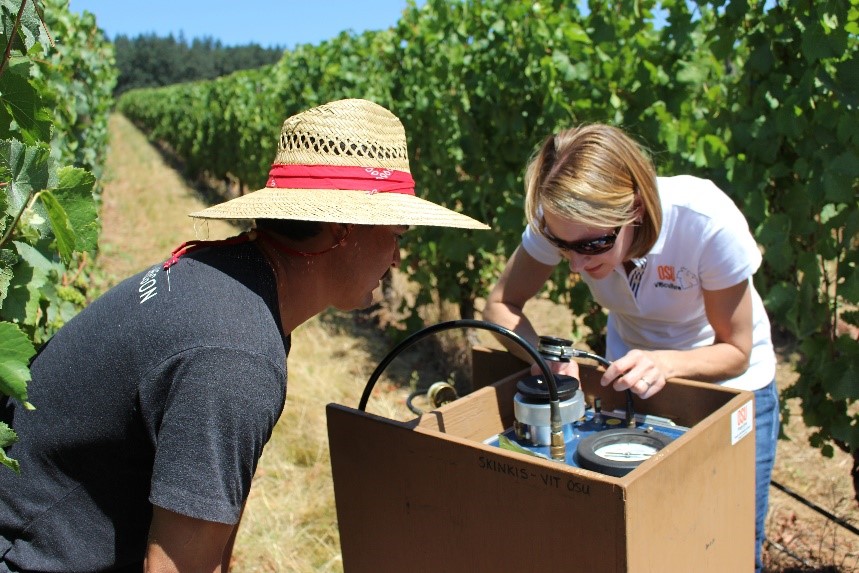 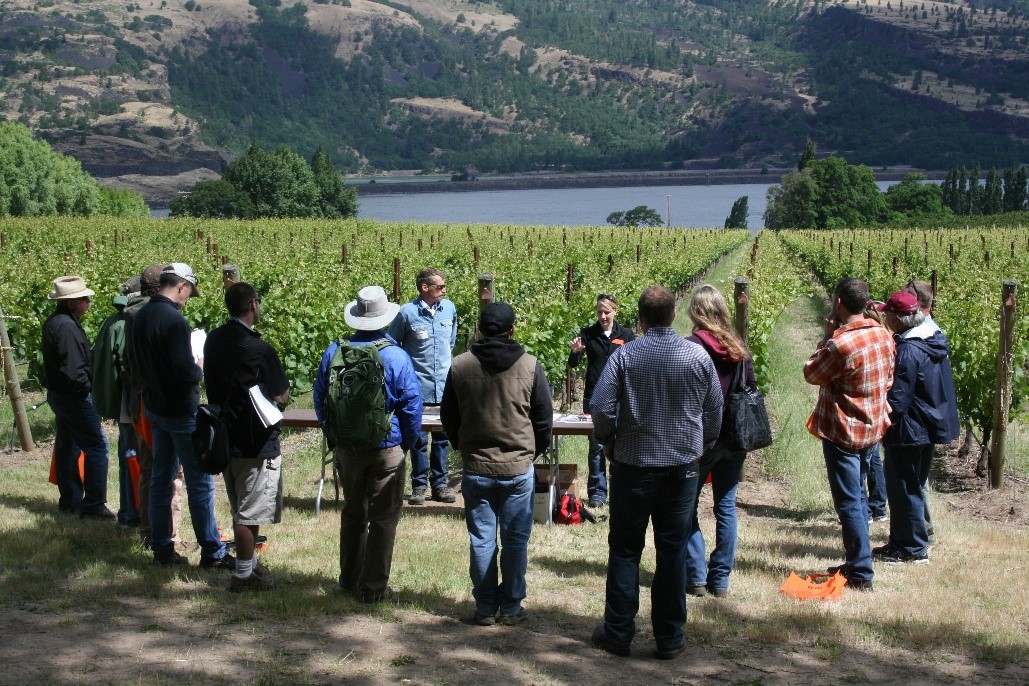 In early 2019, the Oregon Department of Motor Vehicles and OSU Marine Mammal Institute launched a new license plate featuring a gray whale mother-and-calf pair and the phrase, “Coastal Playground.” Each sale and renewal of this special plate directly benefits research, education, and outreach at the Marine Mammal Institute based at the Hatfield Marine Science Center in Newport. Proceeds from the whale plate are making several projects possible, including a gray whale research and student engagement project in Port Orford, attendance at scientific conferences for graduate students, and an upcoming research cruise to find a cryptic beaked whale in the North Pacific Gyre.

You can be one of more than 18,000 Oregonians who are already supporting Oregon marine mammal research by purchasing and renewing a Coastal Playground license plate. The plate is available at all Oregon DMV branches. Everyone at MMI extends their deep thanks to all Oregonian gray whale license plate holders. Learn more at whaleplate.com. 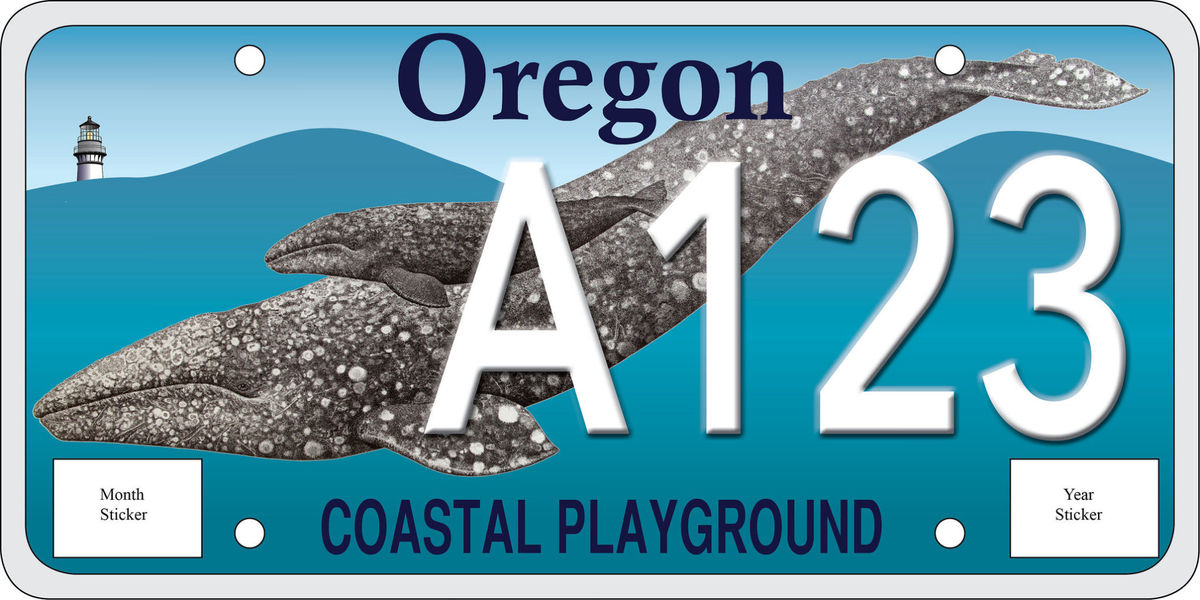 The National FFA New Century Farmer Conference is for past FFA alumni who are in production agriculture and who seek to learn more about the future of ag, succession planning, and how they can play a pivotal role in feeding the future. This year only 44 students were selected. I was asked to help facilitate the conference and upon getting to know the participants, I found a fellow Beaver! Funny enough, I will actually have Catherine Karb as a student this fall in an Ecampus class. She shared she loved the online ag sci degree and the flexibility it provides and plans to enroll in our ag ed program to become an agricultural teacher once she moves to Oregon (she is from Washington).  She said I was the first instructor she got to meet not “on Zoom.” It was such a fun and unexpected surprise! 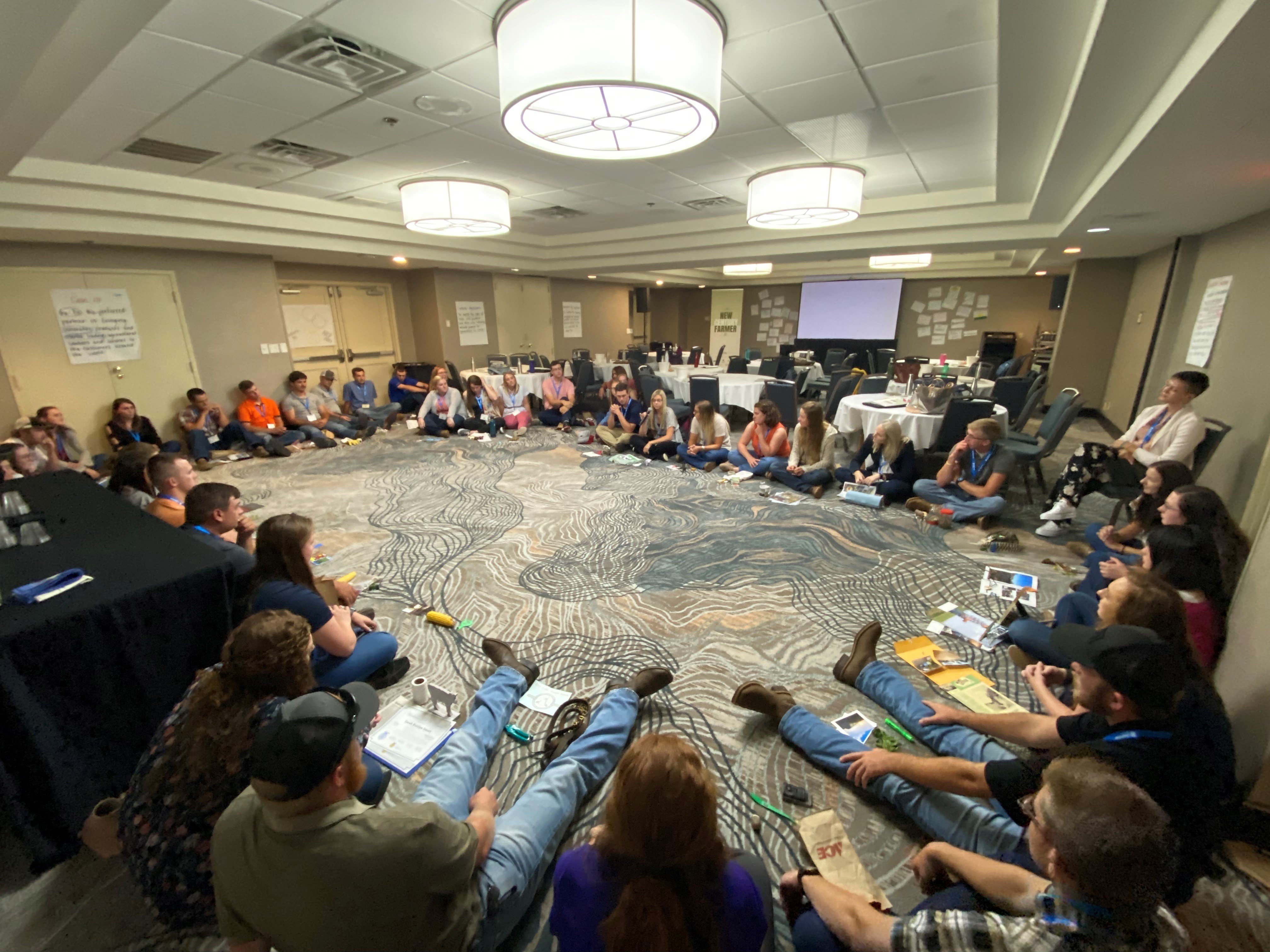 Everyone in a circle sharing their “ag in a bag” where each participant brought something from home that had to do with their “ag” and shared it. 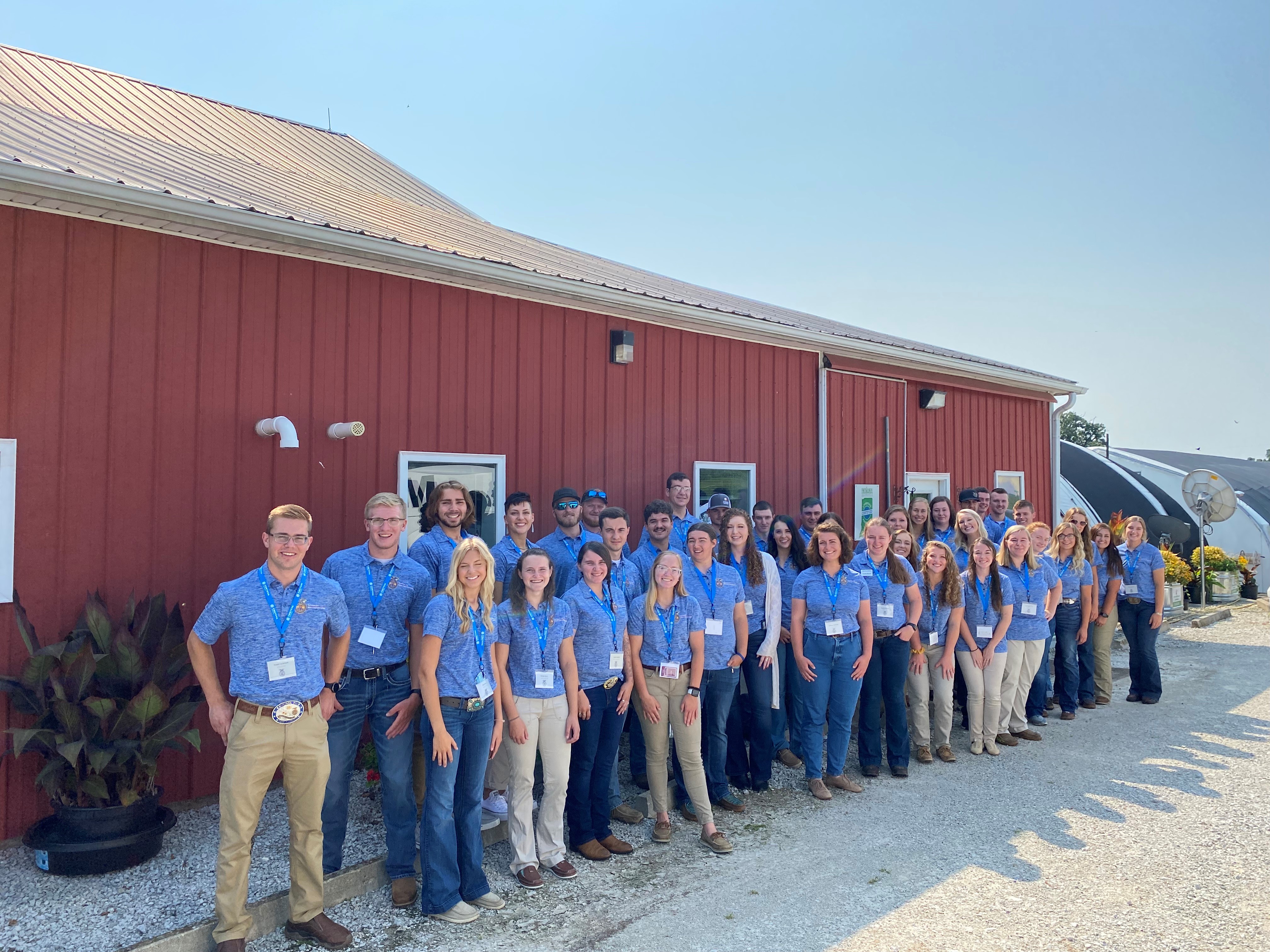 All the participants outside of RDM shrimp, one of the tours we got to go on (that is right- a shrimp farm in Indianna, who knew!)

She was born and raised in Eugene/Springfield, and eventually found her way to Oregon State University in pursuit of a degree in nutrition in 2011. Early in the pre-dietetics program, she realized that a career in nutrition was not for her and she pivoted her educational focus to food science and technology (FST). As an FST undergraduate, she gained a broader appreciation of food and a deeper understanding of the food systems that feed our world. Additionally, she developed a passion for cheese and dairy products while working in the campus creamery making Beaver Classic cheeses.

After graduating, she accepted an internship with Tillamook Creamery in their micro lab and transitioned into their sensory lab as a technician before being promoted into R&D. Two years working in research and development provided her with many opportunities to collaborate across various departments within the company and learn from a variety of technical mentors. However, she sought to accelerate her development as a scientist and felt the need to pursue an advanced degree to achieve this.

As luck would have it, Dr. Juyun Lim in Food Science and Technology and Dr. Nadia Streletskaya in Applied Economics were collaborating on a project that would provide her with an opportunity to return to Oregon State. She describes her time in the FST graduate program as “fun, rewarding, challenging, and at times, rather uncomfortable as she pushed herself out of her comfort zone to grow professionally.”

In 2020, grad school became increasingly challenging as COVID-19 forced us to work remotely, but through perseverance and the support of her committee and community, she was able to successfully defend her thesis with two first author publications. Shortly after graduating, she was hired back with Tillamook Creamery in a newly created role (just for her) as their R&D Product and Sensory Scientist.

“Looking back, I had never imagined that I’d return to school for a graduate degree. However, taking the plunge and seizing the opportunity presented by former advisors was the best decision I have ever made.” 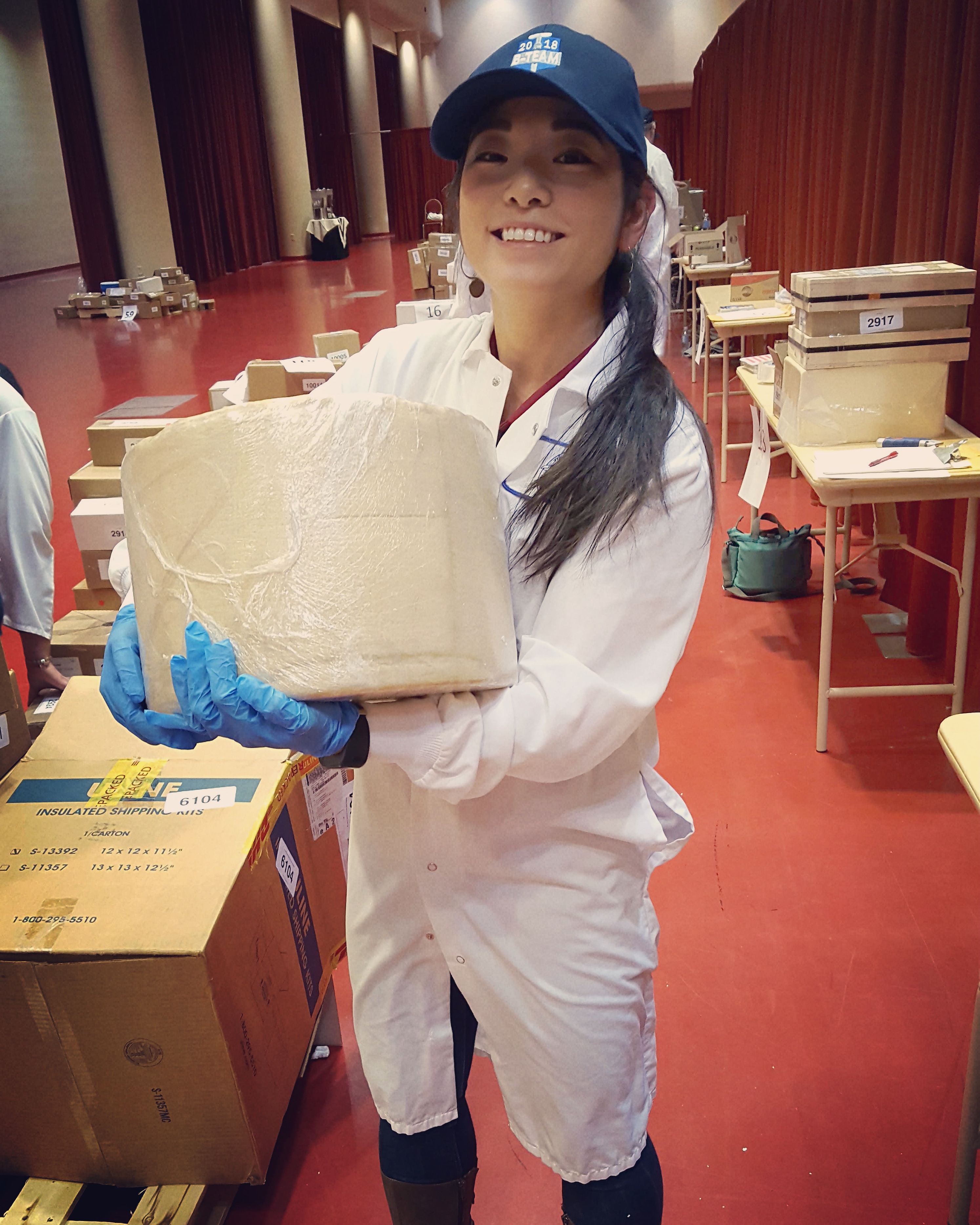