The first turf-type perennial ryegrasses were released in the USA in the early 1960’s. Since that time it has become the most widely planted turfgrass in all of western Oregon, western Washington, and the lower portion of western British Columbia in Canada. It is also used extensively in the interior portions of the Pacific Northwest. From home lawns to athletic fields to golf course tees, fairways, and rough areas this is an important grass for all turf managers. This guide will cover botany, history, cultural requirements, and strengths and weaknesses of this fascinating grass.

Perennial ryegrass is a cool season (C-3 metabolism) perennial bunchgrass best adapted to mild climate areas. As a bunchgrass, it produces only tillers and has limited ability to spread. Turf type perennial ryegrass has a diploid chromosome count of 14. Forage types are either 14 (diploid) or 28 (tetraploid). It has an annual root system, meaning the majority of its roots are replaced annually during the spring flush growth period.

Vernation: New leaves are distinctly folded as they emerge from surrounding leaf sheathes as opposed to annual ryegrass, which has rolled vernation.

Leaf tips:
Leaf tips are intermediate between pointed and distinct boat shaped tips typical of the bluegrasses. I refer to them as speedboats, but I normally don’t bother with this characteristic.

Leaf morphology:
The upper surface (adaxial) is distinctly ridged. These can be seen easily with the naked eye. The underside (abaxial) is smooth and very glossy. It has a distinct arching keel down the center of the leaf. Leaf morphology is the best single ID characteristic.

Ligule:
The ligule is generally small, membranous and somewhat pointed at its apex. I rarely pay much attention to this feature. 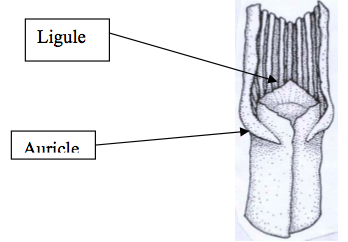 Auricles:
Auricles are the little arm like projections that are attached at the juncture of the blade and sheath. They are best observed on large plants. On perennial ryegrass they tend to be straight and distinctly pointed but may be clasping. As mowing heights decrease they become smaller and less well developed, often disappearing completely.

Other:
Most perennial ryegrasses have red coloration at the base of leaf sheathes. It normally extends upward ¼ to 1/3 the length of the sheath.

Perennial ryegrass has been used for animal forage for over 300 years. In the USA it was first touted as a turfgrass around 1961 when the Oregon AES released ‘Linn’. Linn is rank growing, has poor mowing quality, forms a relatively thin turf, and basically has all of the bad qualities we associate with perennial ryegrass. In 1962 Northrup King &Company out of Minnesota released ‘NK 100’. It was an improvement over Linn but still had poor mowing quality. At this point perennial ryegrass had poor tolerance to heat and cold, poor mowing quality, and a high nitrogen fertility requirement. It was also very easy to establish due to rapid germination and development. Its first big turf market became the south where it was used for winter overseeding in place of annual ryegrass which was the historical standard. Ligule Auricle Ridged Upper Surface Keel & Glossy Underside

By the mid 1960’s breeders were hard at work trying to improve ryegrass. In 1967 Manhattan perennial ryegrass was released by the New Jersey AES and became the first truly improved perennial ryegrass. In 1970, ‘Pennfine’ was released by Penn State University and the race was on to develop more and better perennial ryegrasses. The center of the breeding world was at Rutgers University under the direction of Dr. Reed Funk. Pioneer improved types included ‘Derby’, ‘Fiesta’, ‘Blazer’, ‘Citation’, and ‘Omega’ among many others. In general, early breeding efforts were aimed at producing finer textured darker green grasses with better mowing qualities. Improvements were also being made in selecting for types that did not become stemmy in spring during the flower period. From a production standpoint breeding focused on developing resistance to stem rust, which could be devastating to yields.

As ryegrass became more important for turf in both the southern overseeding and the northern permanent turf markets, private seed companies developed large scale breeding programs and in concert with Rutgers began to develop a virtual flood of new ryegrass cultivars. Heat tolerance and resistance to major diseases such as Rhizoctonia and Pythium continued to be emphasized in most breeding programs. This led to development of second and third generation improvements in some of the standard cultivars and introduction of many new names.

Starting in the 1980’s breeders became aware of new avenues to improve ryegrass. Based on research out of Australia, endophytic fungi could be bred into ryegrasses and confer resistance to many common insect pests including sod webworm, billbugs, and chinch bugs. Now many new and old cultivars contain high levels of endophytes. An added benefit of endophytic fungi is enhanced performance in high stress environments.

The latest challenge to ryegrass has been Grey leafspot disease, which has threatened use of ryegrass in areas with high summer stress including heat and humidity. This may well start the next round of breeding to develop resistance to this disease.

Performance in the Pacific Northwest:

In climates west of the Cascade Mountains throughout the PNW ryegrass has been widely used since it was first introduced. It is the dominant grass planted for lawns, sod production, and athletic fields. It has been used extensively for golf courses everywhere except on greens. It is now rare to find a mixture of grass seed that does not have perennial ryegrass in it. Use in areas east of the mountains has also increased dramatically even though potential loss from cold winters is still a concern. So what are the performance characteristics of ryegrass in our part of the world?

Top cultivars today tolerate mowing from as low as 5/8” to 2.5”. Ryegrass is at its best at heights between 1” and 2” where it provides optimum density and turf quality. Ryegrass struggles to stay dense and competitive at fairway heights and is rapidly replaced by Poa annua, Poa trivialis, and Agrostis sp. when mowed below 5/8”. At low mowing heights it essentially forms a temporary turf. Though still more difficult to mow than most other grasses, the commercially available cultivars today cut cleanly with well adjusted reel mowers and even with sharp rotary mowers. Spring stemminess is rarely a problem with currently used cultivars.

In spite of all the breeding work, ryegrass still requires relatively more nitrogen than most other grasses. This can be challenging because ryegrass is also very responsive to nitrogen and high rates of fertilizer push excess growth. Under inadequate N, ryegrass is susceptible to several diseases which cause thinning, leaving it prone to encroachment from other grasses and moss. Developing a ryegrass with better performance under low fertility should be a higher priority in breeding programs. Realistically, dense green ryegrass turf requires somewhere between 4-8 lb N/1000 sq ft per year throughout much of the PNW.

Ryegrass has good drought tolerance under regular irrigation, meaning it can perform well with one to three irrigations per week in most summers. When subjected to prolonged drought stress it will be one of the last grasses to go dormant and will recover rapidly once water is available again provided the drought period is not too long. Prolonged severe drought periods will cause death of a significant number of plants in a turf. The recovering plants then form patchy clumps and the turf will require overseeding to regain uniformity.

Ryegrass still produces the least amount of thatch of all commonly planted cool season turfgrasses. On soil it is rare to find enough thatch to require dethatching. Lack of thatch production may be related to its tendency to thin out during winter and the apparent affinity earthworms have for senescing ryegrass foliage. West of the Cascades earthworms can turn ryegrass turf into a muddy mess by the end of winter.

Ryegrass can produce significant thatch when grown on sand substrates. On athletic fields, thatch and senescing foliage are commonly ground into the surface by cleated traffic and combine to form an organic bog common on mature sand based turf.

In spite of breeders efforts, ryegrass still suffers from a host of nagging disease problems in the PNW. Under low fertility, essentially all cultivars are susceptible to red thread, pink patch and crown rust. Many cultivars also get brown blight. Ryegrass and red thread have almost become synonymous in our part of the world. Under high fertility ryegrass is quite susceptible to fusarium patch and leafspot. In areas prone to prolonged snow cover, pink and grey snowmold can both cause significant injury. The low fertility diseases can all be managed fairly well with timely applications of nitrogen based fertilizers. Snowmolds will generally require fungicides for control.

Much has been made of the value of endophytic fungi in preventing damage from common insect pests. Since many ryegrasses have endophytic fungi bred into them, this could be of great benefit. Since we have few serious insect pests in the PNW, it is hard to say just how important endophytic fungi really are. There is no research that demonstrates that fungal endophytes are effective in controlling European cranefly.

Many improved ryegrasses have better cold tolerance than early cultivars. It is hard to evaluate the significance of improved cold tolerance in the overall scheme of winter survival. Most damage to ryegrass in winter is the result of snowmold activity where snow cover is present or desiccation/freeze injury in exposed open areas. Newer cultivars are definitely hardier than the ryegrasses of old.

Ryegrass has never been a great grass in shade. The best new cultivars are still thin and weak in heavy shade and tend to rapidly be replaced by Poa trivialis, Poa annua, and Agrostis sp. Ryegrass stands in shade also are often severely infested with moss. Ryegrass has a place in shade culture as a nurse grass for other better adapted species and will provide quick cover in spring when turf is coming out of winter. It should never be relied upon for permanent turf in shade.

With proper fertility and consistent maintenance ryegrass is fairly persistent but will always lose out to bentgrasses and Poa trivialis when they are present. We can do a fairly good job of controlling annual bluegrass invasion by using Prograss herbicide at the time of establishment and then each fall-winter. Since this is rarely done, ryegrass is basically a transition grass that is replaced in a few years by other better adapted grasses.

Ryegrass is a great utility grass that works well alone and in mixtures with other species. Its strong suit is still its rapid establishment capabilities, its ability to germinate in cool weather, its wear tolerance, and its attractive appearance when fertilized regularly. Breeders have consistently improved ryegrass as evidenced by its improved texture, mowing quality, cold tolerance, and slower vertical growth rate. Its biggest weaknesses remain in the form of high nitrogen requirement, poor shade performance, attractiveness to earthworms, and poor long-term competitiveness with other grasses. Because it is so easy to establish, it has been used in many situations where other grasses should have been planted. Look for slow but steady improvement in turf quality as new cultivars are developed in the future.

Ryegrasses listed below are among the best of the current crop of improved cultivars. This list will continue to change as long as there are active breeding programs. 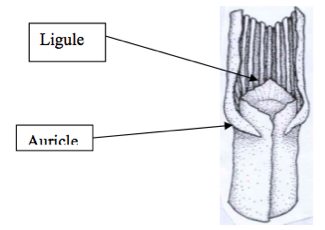