Farmers in western Oregon can lose a significant portion of their winter squash in storage to storage rots. In winters 2012-2015 we collected samples of stored squash with rot symptoms from farmers in western Oregon and the OSU Plant Clinic identified the pathogens causing those rots. This article includes photos of the rot symptoms, descriptions of the diseases, and information on how to control storage rots. 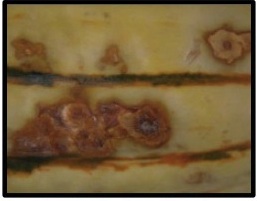 Disease and Causal Organism: Fusarium fruit rots are some of the most common pre-­ and post-­harvest diseases of cucurbit crops. There are at least 10 different species of Fusarium which can cause fruit rots of winter squash. Fusarium spp. survive in soil and are more abundant in higher rainfall areas or in irrigated soils. Most Fusarium spp. infections occur in the field before harvest.

Dispersal Method:  Fusarium spp. are both soil-borne and seed-borne.  Typically, soiborne propagules come into contact with the flower or fruit from splashing of soil during rain or irrigation events or when the fruit touches the soil. Infested seed can also be the cause of Fusarium rots of winter squash.

Symptoms: Fusarium spp. symptoms vary considerably as there are so many different species. In addition, symptoms change as rot lesions develop over time. Some Fusarium rot lesions are small, pitted, corky spots while others are large and sometimes corky areas covered with a white, pink, or gray mold. Lesions can occur anywhere on the fruit, but are often seen on the stem end or where the fruit was in contact with soil. If the fungal rot moves into the seed cavity, seed infestation may occur.

Management: Management of fruit rot of cucurbits caused by Fusarium spp. is difficult. As most Fusarium species don't survive in soil for more than 2 or 3 years, a 3 year rotation out of cucurbits can help suppress these storage rots. Providing a physical barrier (mulch) between the fruit and soil reduces fruit infection by reducing soil contact with fruit. Infection usually occurs through wounds, and can be transmitted during harvesting if knives become contaminated with infected soil or diseased plant tissue. Avoidance of wounding during harvest and packing, storage in cool and dry conditions, and proper handling during transit and marketing will reduce losses due to Fusarium fruit rots.  Heat treatment of infested seed can reduce the likelihood of seed transmission, although in this diagnostic effort we did not find any Fusarium fruit rots that were caused by pathogens that are transmitted on seed. 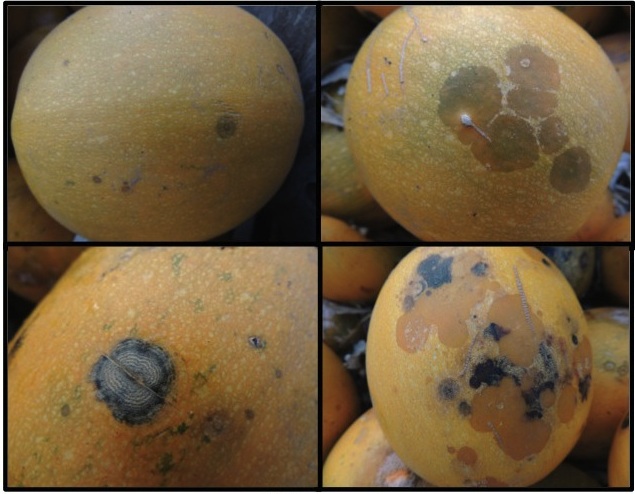 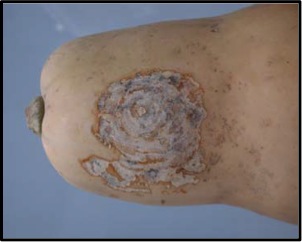 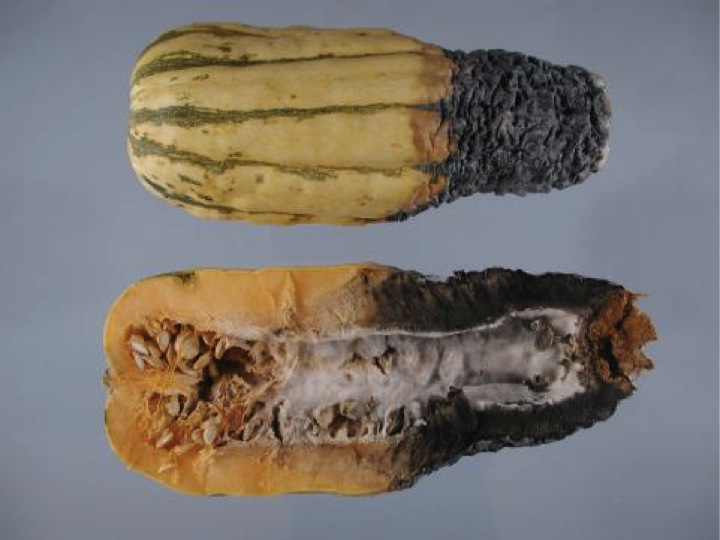 Disease and Causal Organism: Black rot is an important pre-­ and post-­harvest fruit rot of winter squash. Black rot can begin in the field before harvest and continue to develop during transit and storage.

Symptoms: Symptoms vary depending on the cucurbit infected (Figs 4-6). If contracted while still in the field, symptoms usually occur on the side of the fruit touching the ground because high moisture favors infection. Fruits develop small, water-­soaked, dark­ brown lesions. As the lesions expand, they become sunken and darken to black. Fungal fruiting bodies (pycnidia), can often be seen as black specks in a ring pattern on infected areas. On butternut, the lesions appear as bronzed, irregular patches and raised corky areas. Another appearance is a reddish-­brown ring­spot pattern that becomes bleached white (a petrified look). Severely affected fruit may collapse during or after harvest.

Management: Didymella bryoniae survives between the growing seasons on diseased vines, crop debris, and seed. Another source of inoculum are the airborne sexual spores (ascospores) of the pathogen. Care should be taken to avoid rind injuries to all fruit, as the pathogen enters through wounds or injuries in the rind. Under proper curing conditions, wounded areas heal themselves by producing corky tissue. If the decay does extend into the seed cavity, the fungus may come in contact with the seeds of the fruit.

Disease and Causal Organism: Botrytis (gray mold) is a ubiquitous disease that affects many plant species in western Oregon.  The pathogen is spread by airborne spores.  The fungus is always present. The amount of inoculum in a field can be reduced by removing dead leaves and infected fruit, as the fungus lives on decomposing, dead organic matter of many plant species in and around the growing area. After harvest, the fungus survives in the soil as small black sclerotia. Wet, cool weather is necessary for development of this disease.

Symptoms:  The Botrytis pathogen is soil-borne and air-borne.  It commonly infects tissue through injuries and forms gray, velvety mats of sporulating tissues (Fig. 7).

Disease and Causal Organism: White mold is caused by Sclerotinia sclerotiorum. This pathogen has a very wide host range - essentially, all dicots - and is an important disease of snap bean in the Willamette Valley. White mold can cause losses in the field and in storage.

Dispersal Method:  White mold survives in soil as black hardened sclerotia. Sclerotia can germinate directly and infect squash lying on the soil surface. Alternately, they can produce mushroom-like structures (apothecia) which produce spores that can land on and infect squash stems, crowns, and fruit, especially through wounds.

White mold is typically characterized by a watery, odorless rot that leads to the development of white fluffy fungal growth and the production of the very characteristic black sclerotia. The rot can easily spread in the field by fruit to fruit contact. See Figure 8.

Management:  As white mold has a very wide host range, it is difficult to manage through rotation. However, rotation with monocots such as corn, grass family cover crops, or alliums (onions) can reduce white mold risk. Reduce the numbers of sclerotia produced on a diseased crop by incorporating diseased residues immediately after harvest. Keep foliage and fruit dry to reduce the likelihood of infection. To more rapidly kill sclerotia after harvest of a diseased crop, apply Contans™ (Coniothyrium minitans), a biocontrol fungus specific to the white mold fungus.

Stone, A., 2014. White mold of snap bean and other vegetable crops Oregonvegetables.com article.

Stone, A., 2014. What is Contans and how can it be used in western Oregon to control white mold?  Oregonvegetables.com article.