In nature, annual bluegrass, Poa annua L. behaves as a true annual. It germinates in fall or spring when moisture is adequate and develops quickly, often flowering six to eight weeks after germination. In the Pacific Northwest we see it most commonly as a winter annual (Fig 1). After flowering and setting seed these annual types die typically from drought and leave dormant viable seed behind to germinate when moisture again becomes available. This efficiency in seed production makes annual bluegrass a major component of the seed bank of cultivated soils. 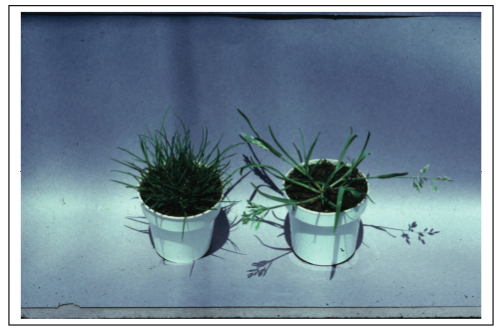 Fig 1. Perennial type annual bluegrass on left vs. annual type on right. Annual types are rare in fine turf in the Pacific Northwest.

When turf managers plant turf they initiate all of the commonly used cultural practices including irrigation. Under irrigated conditions a selection process begins that encourages development of so-called perennial biotypes of annual bluegrass (Gibeault 1972). Among other things, perennial types tiller more and often flower less than annual types. (From my perspective "perennial" is a misnomer because these plants are only perennial as long as they are regularly irrigated.) There is 2 a shift towards plants that in many cases are distinctly finer textured and denser growing than the parent plants.

The flower habit of annual bluegrass includes both self and cross- pollinating types (Johnson, et al 1993). Early contaminants in young turf tend to be cross-pollinating types but continued turf culture selects for self pollinating types. Prolonged intensive turf culture in mild climates often leads to large populations of very desirable turf types many of which have distinct seasonal flowering limited primarily to spring and to some degree to fall.

Morphology of annual bluegrass on well-maintained putting greens often consists of a continuum ranging from erect coarse textured types to strongly stoloniferous relatively fine textured types (Cook 1975). In between are arguably the best turf types that I call compact types. Compact types are slow growing, dense, seasonal in flower habit, and produce few to many flowers that tend not to elongate very much above the canopy. In turf they are conspicuous because they form tight dense circular patches.

Mature turf always consists of a mixture of diverse types of annual bluegrass. Most of these flower heavily in spring starting around the third week in April in most years and continuing through May. For the rest of the summer, flowering is insignificant for most types but there are always a few that flower continuously. Diversity in morphology and flowering is the rule with annual bluegrass and is one of the things we have to accept and work around in producing smooth putting surfaces.

Mild climates lacking extremes in high and low temperatures favor long-term persistence of annual bluegrass and allow the selection process to proceed as far as it can go. The result is a high proportion of desirable turf types. An added plus for much of the Pacific Northwest is low humidity during the growing season. The combination of low humidity and cool night temperatures definitely aid turf managers as they try to maintain annual bluegrass through the hot summer months.

Selection and breeding work at the University of Minnesota resulted in the first commercially available cultivar of annual bluegrass. It also created a nomenclature problem in my opinion. Perennial types traditionally called Poa annua var. reptans suddenly became Poa reptans. I see this as an arbitrary name change that has more to do with patent rights and marketing than it does with plant taxonomy. From my perspective, perennial annual bluegrass is still Poa annua var. reptans. 3

It is my opinion that continued surface disturbance is important for maintaining healthy and diverse populations of annual bluegrass. Regular coring in spring and early fall and if possible in early summer plus regular vertical mowing create an environment that is conducive to renewal of annual bluegrass via the on site seed bank. Superintendents who avoid coring or stretch intervals by coring too early in spring and too late in fall find their Poa annua struggles in summer and is generally weak all year long. The combination of regular coring, regular vertical mowing, and regular topdressing seems to provide almost perfect conditions for renewal and thus continued healthy populations.

One of the frustrations of maintaining Poa annua greens is their tendency to be fast but bumpy. On greens like this the ball tends to jump and skitter across the surface. To correct this problem, we focus on growing vigorous turf and then controlling the surface properties by combining regular vertical mowing and regular sand topdressing. Between topdressings, greens are groomed one to several times per week and rolled as needed to achieve desired speeds and smoothness. The net effect is firm smooth surfaces that putt true.

Actual practices vary; with topdressing frequencies ranging from weekly at very light rates to once every three weeks. Topdressing is a great equalizer because it minimizes the minor dips and depressions resulting from the numerous phenotypes of annual bluegrass. It also creates the firmness golfers want. Double vertical mowing just prior to topdressing further reduces surface irregularities and makes it easier to work sand down into the turf. 4

In our region annual bluegrass can tolerate cutting heights as low as 0.100" and typical heights in summer run around 0.125." Combined with topdressing, vertical mowing, and rolling, mowing at these heights yields very fast, smooth, and firm greens. Where speed is less of an issue, higher mowing heights in the range of 0.130" to 0.160” produce acceptable greens that are easier to keep healthy.

Like most other grasses, annual bluegrass responds well to balanced fertility and mid range soil pH's. Research in The Netherlands (Kamp 1981) demonstrated Poa annua is commonly found in abundance at soil pH's in the range of 5.5 to 7 while bentgrass thrived at pH's from 5 to 6. Annual bluegrass increased as phosphorus levels rose from intermediate to very high in the soil. The same response was observed with increasing levels of potassium.

Nitrogen is important in maintaining healthy Poa annua. In general terms the goal is to encourage consistent growth so there is constant renewal of tillers (Cook 1987). Excess growth leads to soft surfaces prone to a host of diseases including, in our region, Fusarium patch caused by Microdochium nivale. Starving annual bluegrass results in thin weak turf that is slow to recover from injury and may be plagued with diseases such as Anthracnose caused by Colletotrichum graminicola.

Excessive use of ammonium based fertilizers such as ammonium sulfate on mineral soils may stress annual bluegrass and predispose it to diseases including Fusarium patch and Anthracnose. The acidifying effect of these fertilizers may explain these phenomena since acid conditions reduce solubility of important elements such as phosphorus and may increase levels of aluminum that may be toxic to annual bluegrass roots (Clarkson 1966, 1967). On soil, urea, nitrate, or natural organic nitrogen sources may be the preferred forms of nitrogen for encouraging healthy annual bluegrass. Based on our current work on fertility management of annual bluegrass growing on a sandbased rootzone, we are not seeing increases in Fusarium patch due to continued high levels of sulfur. We have observed increased Fusarium patch with annual nitrogen rates above 4.5 lbs N/1000/yr regardless of the source.

Balanced fertility for annual bluegrass appears to mean ratios on the order of 3-1-2 N: P2O5: K2O. Total N for optimum vigor runs about 4.5 to 6 lb. N / 1000 sq. ft / year in the Pacific Northwest where we mow grass 10 to 12 months each year. Superintendents who try to get by with 3 lb. of N or less have weak turf filled with moss and riddled with Anthracnose. Areas with shorter growing seasons will likely require less nitrogen than we need. 5

On soil based sites, keep sulfur at low levels to avoid increased Fusarium patch and Anthracnose. On the basis of work by Goss (1975), sulfur begins to affect the health of annual bluegrass at levels above 1.5 lb. S / 1000 sq. ft. / year. On sand based profiles, it appears we can go with up to 3-4 lbs S/1000 sq ft/yr with no deleterious effects on disease activity.

With our dry summers, irrigation is a standard practice generally from April through September and in some years through much of October. Most superintendents with healthy annual bluegrass greens manage to maintain consistent moisture in the rootzone without over or under irrigating. Problems arise when greens are dried down periodically to achieve extremely fast firm putting surfaces. Alternating wet and dry cycles seem to precipitate nagging Anthracnose disease which may lead to severe thinning by late summer. Conversely, regular over irrigation results in soft puffy surfaces and increased incidence of Brown Patch, and even Fusarium patch depending on the weather. Over irrigation also increases soil compaction and surface sealing due to algae growth. The net result is shallow rooting and plants predisposed to injury during hot weather. The key in irrigating annual bluegrass is to avoid stress to stress irrigation and to avoid consistent over irrigation. Like most simple advice, this is easy to give and hard to follow!

While recent selection and breeding work indicates there is potential in Poa annua for resistance to several diseases, biotypes on Northwest greens seem to be generally susceptible to most common diseases. To maintain healthy annual bluegrass, turf managers have no choice but to treat diseases with fungicides. In the Northwest, basic fungicide programs target Fusarium Patch and Anthracnose and/or Snow molds depending on location. 6

Fusarium is a year around problem on coastal golf courses and a fall through spring problem in other areas west of the Cascade Mountains. In these areas scouting starts in September and continues daily through April and occasionally into May. Standard treatments include systemic fungicides or combinations of systemic and contact fungicides. Country clubs are most likely to treat preventively but many superintendents are very successful using the scout and treat approach. Increasingly, superintendents are adopting true IPM strategies resulting in some cases as much as a 50% decrease in fungicide use.

Anthracnose has become a very serious problem we expect to see in summer during warm to hot weather. Sometimes it responds to curative fungicide applications under these conditions but increasingly fungicides appear to be having little or no impact. Could this be a case of fungal resistance to fungicides? Yes, in the case of Heritage (the first Strobilurin fungicide) and apparently yes in the case of Thiophanate- methyl where both have been overused for a period of time. There are many other reasons for lack of control including poor timing of applications, misdiagnosis of symptoms, and failure to coordinate cultural practices with disease control efforts thus stressing turf at a time when infection is likely.

As bad as the summer foliar Anthracnose problem is, a bigger problem may be Basal Rot or winter Anthracnose. This disease occurs as scattered yellowing of individual tillers, which slowly die and cause turf to thin out over a period of weeks or months. This slow progression can lead to 10 to 30% turf loss in affected areas. Fungicide control is often ineffective once symptoms are observed.

For some, Anthracnose is a year around problem and at times seemingly uncontrollable from a curative standpoint. Superintendents with this problem have had success managing it by increasing nitrogen fertility, irrigating to avoid drought stress cycles, raising mowing heights, coring regularly spring and fall, and using preventive Anthracnose sprays through summer. This typically involves monthly sprays from June through August in most years. Systemic and contact mixtures are generally most effective. In most years preventive controls started in mid June are more effective than similar controls started in July.

Other diseases are generally easily controlled using standard fungicide application strategies. As long as turf managers accept the reality that annual bluegrass is susceptible to many common diseases and plan accordingly, disease control on Poa annua putting greens is no more difficult than on bentgrass. Managing healthy annual bluegrass means living and dying with fungicides, but good culture will decrease the number of sprays needed to produce acceptable putting green turf. 7 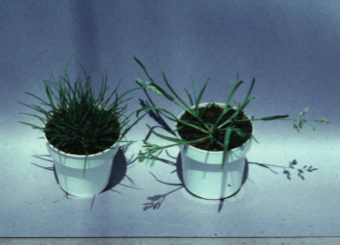