Tall fescue is probably the most widely planted cool season grass in the world. This guide will cover botany, history, cultural requirements, and strengths and weaknesses of this fascinating grass.

Tall fescue is a cool season (C-3 metabolism) perennial grass adapted to a wide range of climate areas. While technically rhizomatous, tall fescue looks and grows more like a bunch grass and has limited ability to spread. Turf type tall fescue has a diploid chromosome count of 42. It has an annual root system, meaning the majority of its roots are replaced annually during the spring flush growth period.

Vernation: New leaves are rolled as they emerge from surrounding leaf sheathes.

Leaf tips:
Leaf tips are pointed. In addition to the pointed tip there is often a constriction in the leaf that occurs approximately 0.5” below the tip of the leaf

Leaf morphology:
The upper surface (adaxial) is distinctly ridged. These can be seen easily with the naked eye. The underside (abaxial) is smooth with a distinct keel near the base of the blade that often disappears as it approaches the leaf tip. There is often a constricted zone about 0.5” below the leaf tip. The edges of the leaves are normally rough due to barb like projections. Tall fescue leaves are wider than all other perennial cool season grasses, though many of the newer cultivars are considerably finer textured than Ky-31 types.

Ligule:
The ligule is relatively short and membranous. I rarely pay much attention to this feature.

Auricles:
Auricles are the little arm like projections that are attached at the juncture of the blade and sheath. Tall fescue auricles range from large and clasping to rudimentary nubs. At times they are absent. I find that common types often have noteworthy auricles while some newer cultivars tend not to show auricles. Ligule Auricle Ridged Upper Surface 3

Other:
On robust shoots you can often see hair like structures protruding from the edges of the leaf blade where it transitions from the blade to the auricles.

In lawns, common type tall fescue stands out because of its stiff, rank, coarse textured foliage. It normally appears as distinct clumps. In general its vertical growth rate is greater than other grasses especially in spring. It is one of the most common contaminants in lawns west of the Cascade Mountains in the PNW. Newer cultivars are often darker green and much finer textured than the old common types. Some look similar to coarser types of Kentucky bluegrass.

History:
Like many of our cool season turfgrasses tall fescue has its origins in Europe. Buckner, Powell, and Frakes(1979) have produced a detailed history of tall fescue and more recently Meyer and Watkins(2003) discussed current development and breeding strategies for this important species. Tall fescue’s history is intertwined with meadow fescue which has a similar range of adaptation and is morphologically similar. Tall fescue was first recognized as a distinct species by Schreber in 1771. Hitchcock first listed tall fescue as Festuca arundinacea Schreb. in 1950. The taxonomy of tall fescue has been reviewed again and its name has been changed Lolium arundinaceum.

Meadow and tall fescue were common in America by at least the 1870’s. Kennedy (1900) felt that meadow fescue was likely used in America before 1800 and by the late 1800’s tall and meadow fescue had become naturalized throughout much of eastern North America (Lamson-Scribner 1896). Development of tall fescue for forage and pastures was slow until 1943 when the University of Kentucky released Kentucky 31(Anon. 1943). Alta tall fescue was released in 1944 and was jointly developed by the Oregon Agricultural Experiment Station and the Forage and Range Section of the USDA Hairs at margin of leaf base 4 (Cowan, 1956). These tall fescues were used primarily for forage, conservation plantings, and roadside stabilization.

Because it was coarse textured and somewhat rank growing, tall fescue was not widely used for turfgrass until the 1950’s when it’s heat and drought tolerance and resistance to diseases that affected common fine turf grasses became recognized. It was particularly well suited for use in the mid-Atlantic region and throughout much of the transition zone in America. Its general adaptability to a wide range of soil types, soil fertility, soil pH levels, and tolerance to moderate cold and heat stresses has made tall fescue an increasingly attractive turf grass.

As late as 1977, Ky-31 tall fescue comprised approximately 97% of all tall fescue turf in the United States (Murray and Powell, 1979). Alta tall fescue was widely used west of the Rocky Mountains and Kenhy showed promise in the southern regions of the transition zone.

Further breeding work led to dwarf tall fescues characterized by even finer texture, reduced vertical growth, and higher tiller densities (Meyer and Funk, 1989). In what seems at times like a universal goal of breeders, the dwarf tall fescues look more and more like Kentucky bluegrass in color and general appearance. Notable cultivars of first generation dwarf types include Trailblazer, Bonsai, Eldorado, Murietta, and Silverado among others. Ironically, these cultivars are also more susceptible to Brown Patch disease in hot humid climates which limits their use there. In addition, the dwarf types have a less extensive root system than the older types and are not as drought resistant. They appear to have a special niche in the dry, low humidity climates of the western states where disease pressure is lower and water is available for irrigation (Meyer and Powell, 2003).

The latest trend in tall fescue breeding is towards cultivars that are intermediate in form between early turf types and the dwarfs. These newer semi-dwarf cultivars appear to have broad adaptation throughout the United States (Meyer and Powell, 2003). In New Jersey, the different forms of tall fescue rank as follows for turf quality: semi dwarf = early semi dwarf = dwarf > standard > early standard and forage types (Meyer and Powell, 2003). In the PNW, the most common tall fescue appearing as contaminants are typical of forage types.

Improved cultivars of tall fescue are well suited to mowing in the 2-3” height range. We have mowed them as low as 1” in test plots in Corvallis, but they are quickly dominated by other grasses such as bentgrass and annual bluegrass. Tall fescue is somewhat difficult to mow but not as difficult as perennial ryegrass. It looks good when cut with sharp rotary mowers.

Tall fescue handles a wide range of fertilizer levels. On clay soils it gets by nicely with 1-2 nitrogen applications per year. Sandy soils may require more applications. It definitely requires less nitrogen than either perennial ryegrass or Kentucky bluegrass based on my observations.

Tall fescue produces the deepest roots of all cool season turfgrasses. On deep soils it commonly will produce roots 2-3’ deep. It is well adapted to deep infrequent irrigations aimed at wetting the profile thoroughly and then letting it dry down until the plants show signs of need. This is not a grass that should be irrigated daily. Once or twice per week even on the east side of the Cascades should be the goal. Take advantage of its deep root system to maximize its competitive ability. Keep in mind that dwarf type tall fescues are not as deep rooted as the standard varieties and therefore are not as drought tolerant.

Tall fescue probably produces the least amount of thatch of all the common cool season turfgrasses. High density dwarf types may be more prone to thatch build up, but I have never observed significant thatch buildup from any cultivars regardless of type.

Diseases: In the eastern parts of the US the big disease on tall fescue has always been Brown Patch. Breeding for improved turf type tall fescues has increased this problem because the dense fine textured types are more susceptible to Brown Patch than older cultivars. Fortunately, Brown Patch isn’t much of a problem in the Pacific Northwest. West of the Cascades we see primarily winter diseases such as Fusarium Patch and Net Blotch. Both of these can cause serious thinning of tall fescue during cool wet weather. On occasion, tall fescue variety trials at OSU have been defoliated clear to the ground by Fusarium patch.

East of the Cascades in snow prone areas, Pink and Grey snowmolds may cause serious turf loss. This isn’t much of an issue most of the time, but significant turf injury can happen if long term snow cover (30-60 days) occurs.

Many turf type tall fescues have high endophytic fungi levels and are relatively unaffected by insects that are sensitive to the alkaloids produced by the endophytes. 6 Occasional damage from cutworms and white grubs may occur, but there is no indication that insect pests are a significant problem anywhere in the Pacific Northwest.

Tall fescue can survive all but the most severe winters in the PNW. Technically, it is just slightly more cold tolerant than perennial ryegrass which is fairly sensitive to freezing during cold open winters. Practically speaking, cold tolerance is not an issue for tall fescue in the PNW.

In the western parts of the Pacific Northwest, tall fescue has proven persistent but not competitive resulting in lawns dominated by other grasses with clumps or patches of tall fescue. I can find tall fescue in most lawns west of the Cascades but never as the dominant component. Most of the tall fescues I see in lawns are the forage types and are probably either Ky-31 or Alta (Fig.1). However, in all of our plot trials with improved types I have observed the same pattern of encroachment and domination of the stand by other grasses resulting in small patches or individual clumps of even the best new tall fescues. In non irrigated lawns tall fescue comes close to being the dominant component but is always intermixed with an under story of other grasses. 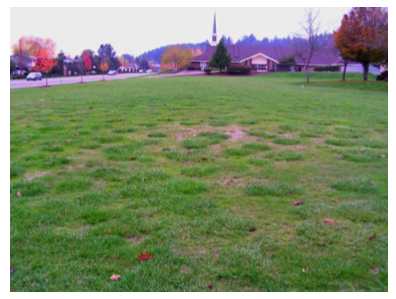 East of the Cascades I have observed a few relatively large plantings of forage type tall fescues under lawn conditions. In Spokane, Washington for instance at Finch Arboretum there is a large planting of tall fescue that is fairly uniform and clearly the dominant grass. I believe improved types of tall fescue could be an important grass in eastern parts of the Northwest if it were simply planted more often (Fig 2). Its heat and drought tolerance, adequate shade tolerance, moderate fertilizer requirement, and tendency to not produce thatch should make it a very easy grass to maintain. 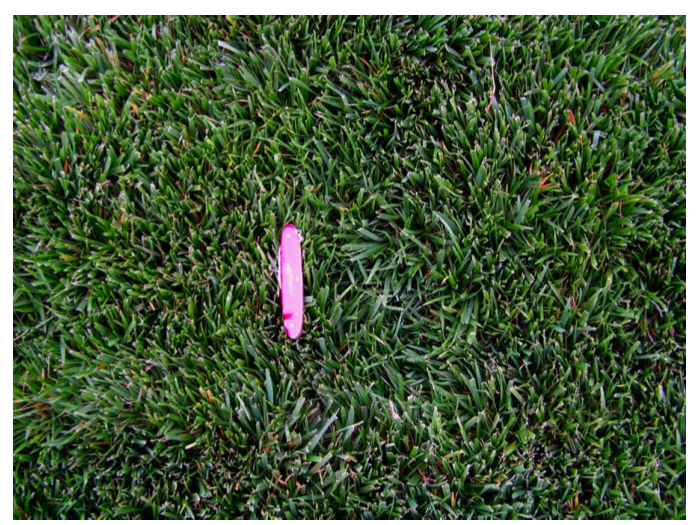 Fig 2. Typical appearance of a semi-dwarf tall fescue cultivar when mowed at 2 inches in Corvallis, OR. Even newer cultivars have the swirling growth habit common to older cultivars. This would be an excellent turf for commercial properties and other drive by lawns as well as open home lawns east of the Cascades. 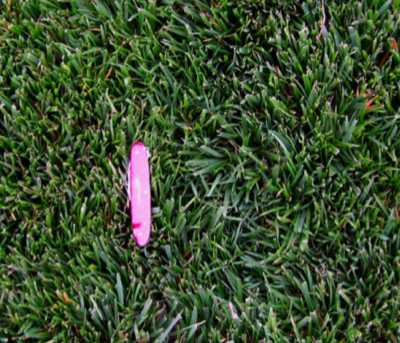