Benefits and Costs of Applying Polyacrylamide (PAM) in Irrigated Furrows

What is Polyacrylamide (PAM)?

Polyacrylamide is a synthetic water-soluble polymer made from monomers of acrylamide. PAM binds soil particles together. Once soil particles suspended in water are bound together by PAM, they settle out, so water has a harder time washing them out of the field. Water-soluble polymers like PAM have been known to benefit soil properties for a long time. Recently these polymers have gained renewed attention for their use in reducing irrigation-induced erosion, now that the cost of applying PAM has become economically feasible. Other uses of polymers like PAM include treatment of municipal water supplies, food packaging, adhesives, a boiler water additive, film former in the imprinting of soft-shell gelatin capsules, adjuvants in the manufacturing of paper and paperboard, and the list goes on and on.

After Soil Science (Bear 1952) published a set of papers that introduced water-soluble polymers as soil conditioners, the Monsanto Chemical Company spent about 10 million dollars producing and marketing the water-soluble polymer Krilium during the 1950's. Krilium was not adopted by commercial agriculture. Although Krilium was able to reduce soil erosion and other problems associated with furrow irrigation run-off, it was too expensive to justify applying it on fields and the recommended application rates were just too high to be economically practical. Since then, more extensive research has been done, identifying water-soluble polymers for agricultural use and effective application rates.

Why would you want to use PAM?

PAM is highly effective in reducing soil erosion off of fields and can increase water infiltration into irrigated furrows (1, 2, 3, 4, 5, 6, 7, 8). PAM has been shown to significantly reduce soil erosion by 90-95 percent when applied to irrigation water. Increases in water infiltration rates vary from 20-60 percent from trials and experiments listed below in the "links" section. The increased use and distribution of polyacrylamide products in the past few years has brought down product prices, making PAM a more economical BMP option. (see cost section below) PAM's many forms and application techniques make integration into the farmer's irrigation routine smooth and relatively easy once the initial set-up is complete. Relatively low cost, high reduction of irrigation-induced erosion and soil loss, ease of use and integration, make Polyacrylamide a best management practice worth looking into by any agricultural operation. 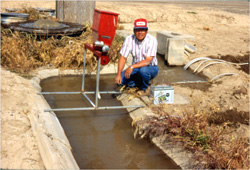 How is PAM applied and what forms does it come in for application?

The application method of PAM chosen depends on the form of PAM selected. The use of dry granular PAM into irrigation water is facilitated by the use of an augured metering system and excellent mixing and thorough dissolving before the PAM reaches the irrigated furrows. PAM blocks (or cubes) are usually placed in wire baskets that need to be secured to the edge of the ditch to avoid washing of the blocks down the ditch. Liquid PAM can be metered directly from the container into the irrigation ditch, directly into the furrow, or through a pipe line or injector pump.

Dry granules of PAM can be applied either by dissolving directly in the irrigation ditch before it hits the furrow, or applied directly in the furrow using what is known as the "patch method". In order for the PAM to dissolve properly in the irrigation ditch it must have proper agitation. Unlike sugar or salt which dissolve fairly quickly in water, granular PAM needs to be agitated thoroughly in order for it to dissolve. If not agitated, PAM globules form, and in time the globules can float down the furrow with little effect on the furrow erosion. A way to make sure the applied PAM is dissolved is to have a drop structure in the irrigation ditch to add turbulence to the water before it hits the furrow. Another tip to achieve desired dissolving is to place the applicator close to the point where the irrigation water first hits the ditch. In a concrete ditch, tins or boards will provide sufficient turbulence. In a earthen ditch a drop dam works nicely. 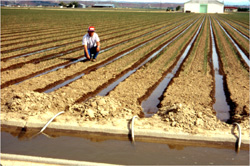 Table 1. PAM application by the patch method at the head of the furrow sufficient to provide 1 lb of PAM per acre with different furrow spacings and lengths. Data is shown as g/furrow (oz/furrow). Malheur Experiment Station, OSU.

PAM blocks are usually placed in wire baskets in flowing ditches at turbulent points. The blocks slowly dissolve, releasing small amounts of PAM into the water. Of the three forms PAM blocks may not perform as well as well as liquid or granular PAM in furrow irrigation. PAM blocks, however, have been useful for treating settling ponds to accelerate water clarification and promote flocculation. They can also be used to dose concentrated runoff areas on fields that otherwise cause uncontrolled erosion.

Emulsified PAM (special liquid PAM solutions) can be applied like the granular form into irrigation ditches or into furrows using the patch method. Emulsified PAM doesn't require quite the vigorous mixing as the granular form, but still needs adequate mixing for dissolving. Emulsified PAM is more voluminous than dry forms, but is easier to dissolve and is the only form of PAM that should be used for sprinkler irrigation systems, due to greatly reduced the risk of clogging the lines.

Why would you want to use granular or liquid PAM in your irrigated furrows?

In an experiment done at the Malheur Experiment Station in 1995, tests on two different application techniques of PAM (liquid and granular) showed both reduced sediment loss and increased water infiltration into the soil (7). The experiment was designed to determine if granular PAM could be as effective at reducing erosion in furrows when applied starting at the beginning of the head ditch (where it has not yet thoroughly dissolved) as when applied to the furrows further down the head ditch. Since applying granular PAM tended to be easier for farmers to handle rather than liquid PAM, research needed to be done to determine whether or not there was a significant difference between the two. The two forms of PAM were supposed to be applied at similar rates, but liquid PAM ended up being applied at a rate of 0.9 lb/acre and the granular PAM at a rate of 1.8 lb/acre. The difference was caused by the changes in volume of water flowing in the head ditch during the experiment and by other changes in irrigation management on the commercial farm. For soil erosion the check furrows lost 322 lb/ac of sediment off of the field in the runoff water during a single irrigation. Furrows irrigated with granular PAM lost 7 lb/ac of sediment off of the field, while those irrigated with the liquid solution of PAM lost 104 lb/ac. Remember though, the granular PAM was applied at a rate double the liquid. 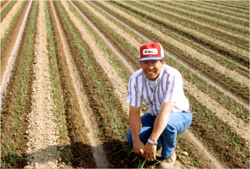 * The naming of a supplier and products is not to be considered an endorsement or criticism of other similar suppliers and products.

Since the recommended rate of PAM in water is around 10 ppm to be effective for reduced soil erosion when the water is first advancing through the field, trial and error for each field is necessary with different irrigation rates and applicators. Assuming that PAM is applied at a rate of one pound an acre for each irrigation, and an added labor or purchased applicator cost of $1.00 an acre for PAM application, the cost of applying PAM is relatively low. A per acre estimate for one irrigation using granular PAM is $2.86. PAM, however, needs repeated applications, especially following cultivations, which increases the total cost of erosion control during the season. Assuming the the initial irrigation and three irrigations following cultivations receive the full pound rate and 10 other irrigations receive a half pound rate, the total cost for the season would be 9 lb/ac of PAM at $1.86/lb and 14 applications at $1/ac, for a total of $30.74/acre for a year.