Cost and Benefits of Surge Irrigation

Surge irrigation is a conservation practice that has been thoroughly developed and tested by the University of Nebraska and valve manufacturers, but remains one of the lesser known and lesser used methods in the Treasure Valley of southeastern Oregon and southwestern Idaho. Surge Irrigation can reduce irrigating costs through lower water use and reduced labor to irrigate. Surge irrigation reduces the total amount of irrigation water applied, excess water infiltration, and runoff water losses. Surge irrigation helps reduce the amount of sediment lost from furrow-irrigated fields. 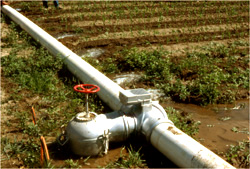 What is surge irrigation?

Surge irrigation uses a surge controller butterfly valve placed in the center of the top of the field with gated pipe leading out of the valve going both directions along the top of the field. In fields with some side slope, the surge valve can be placed in the corner of the field, and extra pipe used to distribute the water. The valve works by oscillating water from one side of the valve to the other at decided intervals. (In conventional irrigating systems the water flows continuously for the irrigation set.) The alternating flow of water on each side of the valve causes an intermittent wetting and soaking cycle in the irrigated furrow. This causes soil particles to settle to the bottom of the furrow and can reduce the water intake rate of the soil. With a reduced intake rate the water can advance down the furrow faster giving the field a more uniform water application, while requiring less water for an adequate irrigation. One of the major drawbacks of surge irrigation is the cost involved in switching irrigation systems. When a field needs to be re-leveled and the surface irrigation system redesigned, the benefits of surge are most definitely worth looking into.

Surge valves have controllers which allow the grower to choose the durations of the irrigation oscillations from one side of the field to the other.

Why would you want to use surge irrigation? 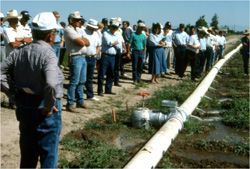 With the upcoming standards regarding water quality, the use of best management practices in irrigated fields to reduce soil loss, nutrient loss, and water usage, is becoming very important. Studies done at the Malheur Experiment Station on surge irrigation have shown significant benefits with regard to increased irrigation efficiency, yield maintenance while using less water, reduced nitrogen leaching in some fields, and reduced sediment loss. 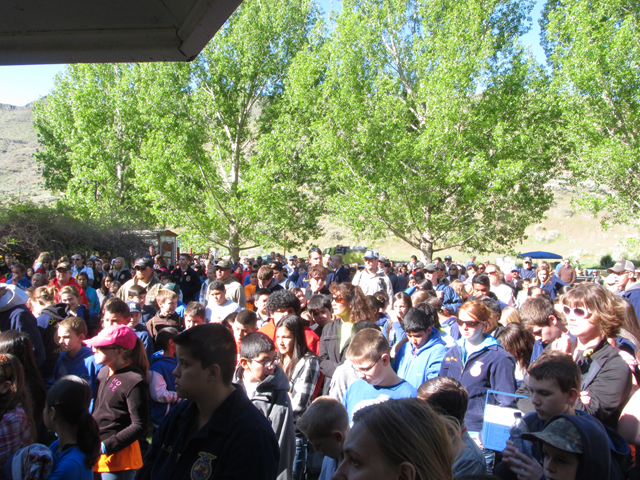 How do I change an irrigation system to Surge?

If a gated pipe system is already in place, changing your current system to surge could be relatively easy and low cost with many benefits. If there is not too much side fall in the field, all that would be needed would be a surge control valve, and added pipe to connect to the valve. Fields with substantial side fall can be adapted to surge irrigation by placing the valve at the corner of the field where water enters and have a transmission pipe parallel the gated pipe down the first half of the field.

For many fields currently using gated pipe, the main costs are the surge valve and any extra distribution pipe required to and from the surge valve. Surge valve costs depend on the manufacturer, the size of the pipe, and the complexity of the controller used. Valves for 8 to 10 inch pipe cost $755 to $895, and the cost of a controller may run from $545 to $1015 depending on the controller's features. Costs are relatively low, considering the savings in labor and water and the reductions in the volume of water runoff achievable with surge irrigation.